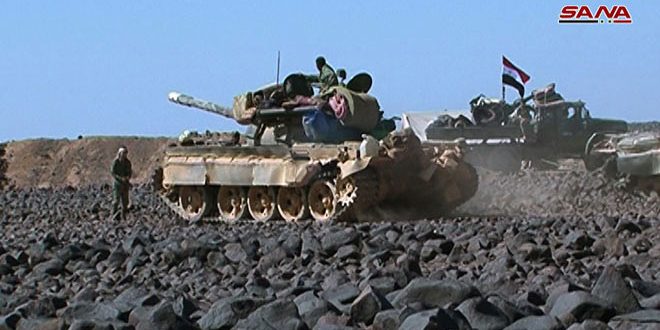 SANA reporter said Sunday that army units established full control over the administrative borders of Sweida eastern countryside after eliminating many terrorists, while the remnants fled away.

The reporter added that army units continued operations against Daesh gatherings in the direction of the administrative borders of Damascus Countryside Province after regaining control over Tal Manat al-Husan, and they advanced in the direction of Ard al-Baida and al Rahbeh.

Army units encircled terrorists’ gatherings in Toloul al-Safa after cutting off all their supply routes, according to the reporter.

The reporter added that the engineering units continued to comb the liberated areas in the depth of Sweida Badiyah, in addition to removing and dismantling the explosive devices, mines and car bombs left behind by Daesh terrorists.