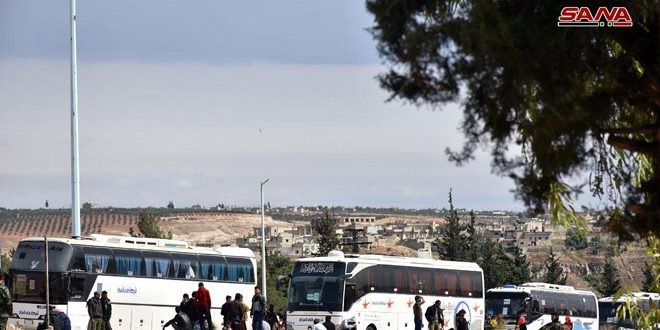 Hama, SANA- The first batch of terrorists along with their families on Monday exited Hama and Homs countryside heading for north Syria , in preparation to evacuate new batches in the upcoming days to free the area from terrorism and return the state institutions to it.

SANA reporter said that 62 buses carrying hundreds of terrorists along with their families who are unwilling to settle their cases set off on Monday evening from  al-Rastan Bridge towards Jarablus.

The buses have been thoroughly inspected to prevent the terrorists from abducting the civilians who are unwilling to leave or pick up IEDs for fear of detonating them while travelling to northern Syria to accuse the Syrian state of, the reporter said.

The reporter added that the evacuation process came after the army vehicles had removed the barricades on Homs-Hama highway and the terrorists handed over their medium and heavy weapons.

During the past three days, the terrorists have handed over six tanks, 3 BMP vehicles, two Shilka vehicles, a huge number of mortars and various kinds of cannons and amounts of rocket and mortar shells.

evacuation first batch Rastan terrorists 2018-05-07
hala
Share
Previous SANA reporter: Buses start to enter al-Rastan city to transport the first batch of terrorists unwilling to settle their cases and their families from Homs northern countryside and Hama southern countryside to northern Syria.
Next SANA reporter in southern Damascus: 40 buses enter the towns of Yalda, Babila and Beit Sahem to start evacuating the 5th batch of terrorists who are unwilling to have their status settled along with their families to northern Syria.