Putin: Only Syrian people have the right to self-determination, circumstances suitable to end crisis 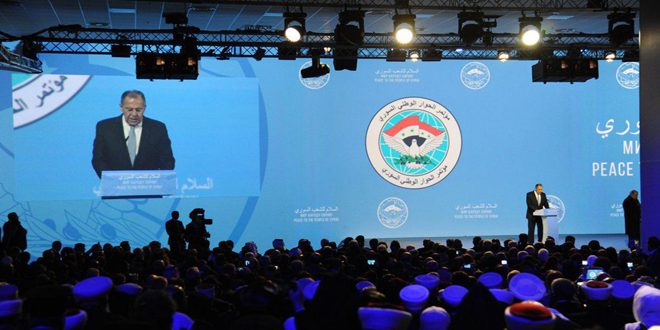 Sochi, SANA- Russian President Vladimir Putin reiterated that only the Syrian people have the right to self-determination, adding that Syria, backed by the Russian aerospace forces, was able to destroy the terrorist organizations, and now all appropriate circumstances are ensured to end the crisis in the country.

In his message to participants in the Syrian National Dialogue Congress in Sochi, which was read out by the Russian Foreign Minister Sergey Lavrov, Putin welcomed all those who accepted the invitation to attend the congress, indicating that this Congress could unite all spectrums of the Syrian people.

“Russia has initiated to convene this congress which was supported by the UN organization and Jointly with the partners in the Astana process, Iran and Turkey, Syria’s neighbors of Arab states, we tried to make this event as representative as possible, based on the fact that only the people of Syria have the right to determine the future of their country,” the message says.

The Russian President stressed that now all appropriate circumstances to end this painful page of the history of the Syrian people are available and there is a decisive need to hold a comprehensive Syrian dialogue for settling the crisis in Syria under the sponsorship of the UN in accordance with the UN Security Council’s resolution no. 2254.

Putin said that after many years of the terrorist war on Syria, which claimed the lives of hundreds of thousands of the Syrian people, Russia exerts all possible efforts to realize lasting and firm peace in Syria and to enhance Syria’s national sovereignty.

He pointed out that Syria, backed by Russian Aerospace Forces, managed to destroy the terrorist forces and thanks to the Astana meetings with the participation of the guarantor states; an agreement on the establishment of de-escalation zones was reached, stressing that this could preserve the cessation of the hostilities, improve the humanitarian situation, start rebuilding process and increase mutual confidence among the Syrian people.

Putin thanked Russia’s partners in Iran, Turkey and the UN Organization for good preparation for the Congress which is considered a unique event since it represents different segments of Syrian society.