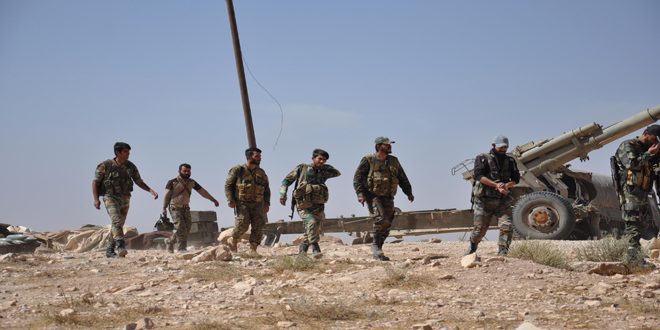 Deir Ezzor, SANA – The army re-established control over al-Husseiniyeh village to the northwest of Deir Ezzor city and on a number of strategic points in al-Mayadeen area.

In the course of their continued operations to the east of Euphrates River, the army units retook al-Husseiniyeh village, located northwest of Deir Ezzor city after eliminating the last ISIS gatherings in it, a military source told SANA on Monday.

The source added that the army units carried out accurate operations from the northern and western directions of Deir Ezzor city that resulted in the army tightening its grip on the remaining ISIS terrorists stationed inside some of the city’s neighborhoods.

Tens of terrorists were killed and their weapons and equipment, including armored vehicles and vehicles equipped with various types of machineguns and mortars were destroyed as a result of the operations, according to the source.

Meanwhile, SANA reporter in Deir Ezzor said that after restoring control over al-Mayadeen city on Saturday, the army continued advancing towards Buqrus village, 10 km to the west of the city, and established control over strategic points after leaving many ISIS terrorists dead, including Abdul-Hamid Issam al-Jarwan, one of ISIS’ leaders in al-Mayadeen.

The reporter pointed out that the Syrian Air Force supported the ground operations as it raided fortified points and infiltration routes of ISIS in the direction of al-Husseiniyeh and al-Juneineh villages, destroying a number of them.

The strikes of the army’s Air and Artillery forces targeted ISIS hideouts in the villages of Shaqra, al-Jiaa, Ziban, Mihkan, Buqrus Tahtani, Buqrus Foqani, Mo-Hassan and al-Bo Omar, destroying a site for the so-called Abu Muhannad al-Halabi, the official in charge of the “Islamic Police” in al-Bo Kamal area, where he and a number of terrorists, some of them are Chechen, were killed at the site.