Prime Minister: The government is going ahead in carrying out housing projects in various provinces 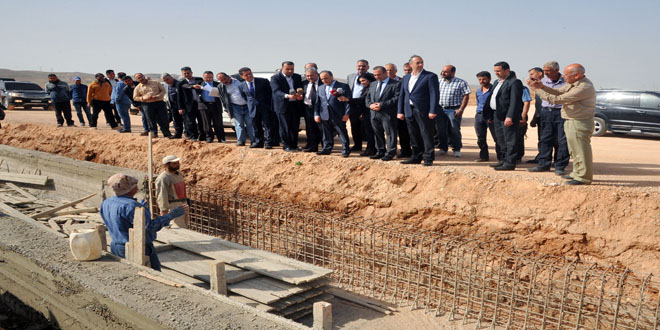 Damascus, SANA- A government delegation, chaired by Prime Minister Imad Khamis, inspected al-Fayhaa Residential Project in al-Baja’a area in Damascus Countryside.
During the visit, the delegation was briefed by the project managers on the work steps and the timetable for the completion of the project.

Speaking to reporters, Khamis said that the launching of this project, which includes 11 thousand housing units at a cost of up to SYP 160 billion, is an important achievement that reflects the strength of the state and people in Syria despite the circumstances of the terrorist war.

Khamis pointed out that the project was distributed between the General Establishment for Housing and the private sector for the submission of the public subscription and allocating 50% of the project to the martyrs’ families. Qudsaya Suburb in Damascus Countryside which includes 1600 apartments and will be completed in two years.