Homs, SANA-Following rigorous searching and inspection, the competent authorities seized amounts of weapons and ammos that terrorists left behind in Homs northern countryside.

SANA reporter in Homs said the weapons were discovered in Talbiseh and al-Farhaniya farms in the northern countryside of the province, hidden in a graveyard and the farmlands in the area. 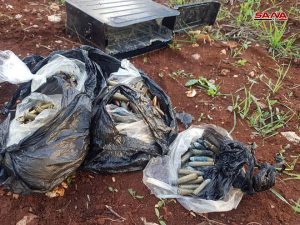 He added that the Syrian army has been exerting efforts to consolidate a state of security and safety in Homs northern countryside since it was liberated from terrorism.

In the same context, the competent authorities discovered amounts of ammunition left behind by terrorists in Wadi Buhairan in Damascus southwestern countryside.

SANA reporter in Damascus countryside said the competent authorities discovered amounts of ammunition hidden in a truck and covered in organic fertilizer left behind by terrorists in the area of Wadi Buhairan near Beit Tima village in the province’s southwestern countryside.

On Monday, authorities found weapons and ammunition including missiles and cannons left behind by terrorists in the Eastern Ghouta and in a number of towns in the central and southern regions.

2018-11-27
Manal
Share
Previous Lavrov: We agree with France on a political solution to crisis in Syria
Next Russian Defense Ministry: Chemical Compound to analyze soil samples taken from toxic shell shrapnel in Aleppo