General-Secretariat of Arab Journalists Federation Meetings kick off in Damascus Damascus, SANA- Meetings of the General-Secretariat of Arab Journalists Federation kicked off on Saturday in al-Cham Hotel in Damascus, with the participation of chairmen and representatives of the Arab journalists federations in a number of Arab countries.

Delivering a speech during the opening of the meetings, Information Minister Imad Sarah presented what has the Syrian media encountered, including targeting Syrian journalists and media establishments by terrorists and getting satellite TV channels off the airwaves. 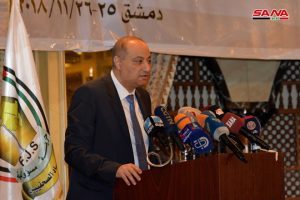 Sarah stressed that the journalists have faced a fierce media war aimed at distorting realities , yet they remained loyal to their national, human and professional duty.

The Minister pointed out to the need that the meeting arrive at conclusions to serve all the Arab journalists and adopt a clear stance to lift the siege imposed on media.

For his part, member of the Central Leadership of al-Baath Arab Socialist Party, Dr. Mahdi Dakhlallah said that the war was waged against Syria because it had not given up on its principles. 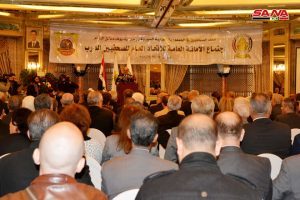 Lami said that the Federation of Arab Journalists has taken firm steps towards the future with the aim of constructing a positive image about the situation of Arab journalists, particularly amid development of media technologies, saluting the martyrs’ souls of the journalists who defended their countries by the free ward.

The two-day meetings will discuss a number of the professional issues of concern to journalists and the topics on the agenda.