Baghdad, SANA- For the 5th consecutive day, the Syrian pavilion at Baghdad International Fair has been enjoying large visitor turnout, with the Syrian industrial, textile, medical, agricultural and cosmetic products receiving more attention than other international pavilions participating in the fair. 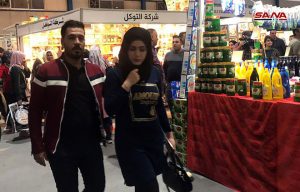 Speaking to SANA, Member of the Syrian Chambers of Commerce and Industry Federation, Ali Tourkmani said that the large turnout by the Iraqi’ visitors at the pavilion is an indication of their strong confidence in the quality of the Syrian products.

Toukamani indicated that contracts have been signed between many Syrian companies and Iraqi importers in order to provide the Iraqi market with the Syrian products. 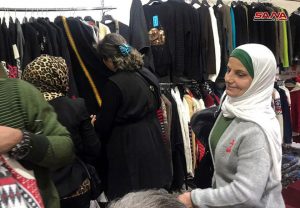 For his part, Chairman of the Joint Iraqi-Syrian Chamber of Commerce Sadiq Abbas said that work is underway to set up a program which provides a permanent exchange of Syrian and Iraqi goods aimed at serving the development plans in the two brotherly countries.

The 45th Session of Baghdad International Fair 2018 opened on Saturday with the participation of 700 companies and establishments from 18 countries, among them Syria which is participating with 21 companies with a total area of 250 square meters.