Authorities find IEDs, landmines, and shells left behind by terrorists in Damascus Countryside 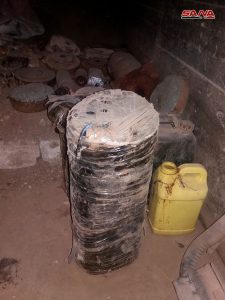 SANA’s correspondent said that While securing areas and farms cleansed from terrorism on both sides of the administrative line between Damascus Countryside and Quneitra provinces, engineering units uncovered a number of IEDs, landmines, and shells that terrorist had concealed in a sewage treatment station and an underground cache in the area between the villages of Beit Saber and Beit Tima.

The correspondent said the items that were found included 130 mm artillery shells, mortar shells, various types of IEDs including one made to look like a piece of rock like the ones found in the area, and anti-armor landmines.

cache Damascus Countryside IEDs landmines shells 2018-11-13
Hazem al-Sabbagh
Share
Previous Homs Police Commander to SANA: 6 civilians injured due to explosion of bomb inside a passenger bus in al-Siteen Street in al-Zahraa area.
Next Six civilians injured by grenade that went off by mistake in Homs