Three people killed in terrorist attacks in Aleppo and Homs 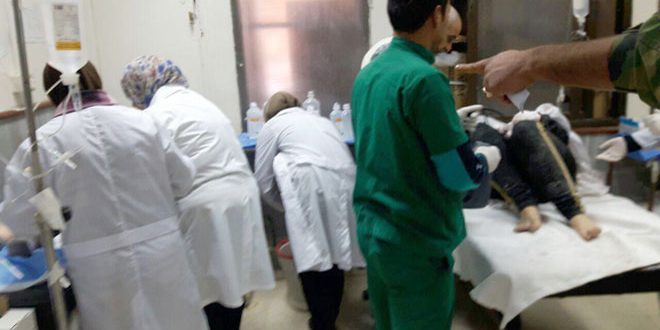 Provinces, SANA – Two people were killed on Thursday due to terrorist rocket attacks on the residential neighborhoods of Bab Jinin and Bab Antakia in Aleppo city.

SANA reporter said a number of rocket shells were fired by terrorist groups positioned in the southwestern countryside of Aleppo on the above mentioned neighborhoods.

The attacks left a man and his daughter dead and two other persons injured, in addition to causing material damage to the locals’ houses and properties.

The bodies of the dead and the injured people were transferred to al-Jamiaa (University) Hospital, where the injured have received the necessary treatment, said a medical source at the hospital.

One person injured in terrorist sniper shootings in northwestern Homs

In the same context, a person was killed in terrorist sniper shootings by Jabhat al-Nusra in al- Shaniyeh village in the northwestern countryside of Homs.

The shootings left one person dead, the reporter added.

Meanwhile, terrorists targeted the Customs region in Damascus with two rocket shells, one of them fell on one of the residential buildings near Economy Faculty.

A police source told SANA that the terrorist attack caused material damages without any casualties.