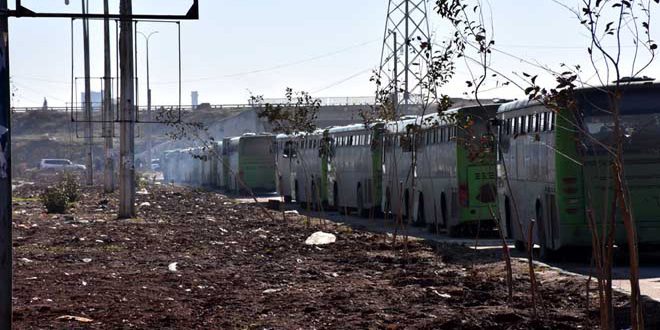 Aleppo, SANA – Special sources told SANA that the delay in the exiting of the last batch of the terrorists and their families from the eastern neighborhoods of Aleppo city is due to differences between the terrorist groups in addition to their preventing the evacuation of a new batch of patients, wounded persons, women, and children from al-Fouaa and Kefraya to Aleppo.

The sources explained that 62 buses loaded with hundreds of terrorists and their families were scheduled to exit Aleppo city and head to the southwest countryside of Aleppo, but this was delayed due to differences between the terrorist groups inside the neighborhoods of al-Zabdia, al-Mashhad, Salah Eddien, and al-Ansari in the city, and this in turn delayed the scheduled evacuation of tens of humanitarian cases and families from Kefraya and al-Fouaa towns were scheduled to arrive to Aleppo city on board 8 buses, which was to be carried out in parallel with the terrorists’ exit from the city.

The sources affirmed the Syrian government’s commitment to accomplishing the agreement that aims at clearing the city of Aleppo completely from weapons and militants and evacuating hundreds of wounded persons, patients, women, and children form the terrorist-besieged towns of Kefraya and al-Fouaa in the northern countryside of Idleb.