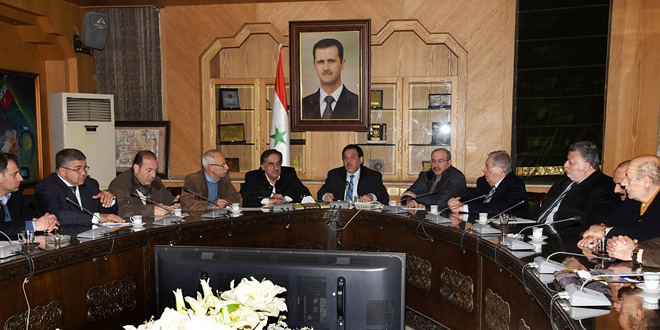 Aleppo, SANA – Finance Minister Ma’moun Hamdan said that the government is ready to respond to any suggestion or innovative idea or solution that would return luster to Aleppo and help its economy recover.

During a meeting held at the Municipal Palace in Aleppo on Friday which was attended by representatives of economic activities and directors of public sector banks, Hamdan said that Aleppo is an economic, industrial, and workforce reservoir that can contribute greatly to national economy.

He asserted that the government will spare no resources for Aleppo or any other province or area, adding “we’re moving towards a reconstruction that will require massive resources.”

The Minister said that the government will hold meetings in Aleppo to witness firsthand the reality in it, network properly among public and private sector establishments, and devise plans and solutions to achieve the goal of supporting Aleppo in order to restore its remarkable and pioneering role in economy.

For his part, Aleppo Governor Hussein Diab said the Governorate is committed to supporting services and economic sectors by providing facilitations, overcoming red-tape, improving performance, and invest in available resources in an optimal manner.

Some of the attendees called for providing loans for economic activities to allow them to restart production and for amending some laws and legislations to suit the current conditions and encourage investment, in addition to revising legislations related to taxes and fees and to supporting small and medium-sized projects.