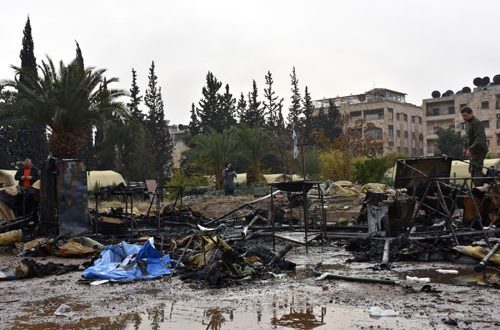 Damascus, SANA – Syria condemned in the strongest terms the attack launched by the terrorist organizations in Aleppo which targeted a Russian field hospital providing healthcare to the injured ,who are victims of the Takfiri terrorism, claiming the lives of some members of its medical staff and injuring others.

Foreign and Expatriates Ministry said Tuesday in a statement that these criminal attacks clarify again the terrorist nature of the armed groups, which the West insists on describing as moderate, and thus it assumes the political and legal responsibilities for these crimes through providing all sorts of support to these groups, in addition to their suspicious silence over their crimes, which discloses the falseness of the western allegations manifested by  the fake lamentation over the humanitarian situation in Syria.

The statement added that Syria stressed that it will not leave its citizens in the eastern part of Aleppo hostages by terrorists and it will exert all possible efforts to liberate them, and therefore, it rejects any attempt by any side calling for ceasefire in eastern Aleppo unless it guarantees the exit of all terrorists from it.

The Foreign Ministry stressed that Syria expresses gratitude to Russia and China for vetoing a draft resolution talking on a truce but does not guarantee the exit of the gunmen from eastern Aleppo, which gives those terrorists the chance to re-mobilize themselves and repeat their crimes.

Renewing commitment to providing all sorts of help to the citizens, who are victims of the Takfiri terrorism and the Western hypocrisy,  the Syrian Arab Republic reaffirms that eradicating terrorism is the sole way for putting an end to the suffering of the innocent civilians and providing necessities of decent life, on top of which security and stability, the statement said.

The Foreign Ministry concluded by saying that Syria offers heartfelt condolences to Russia and the families of the victims, wishing quick recovery to the injured.