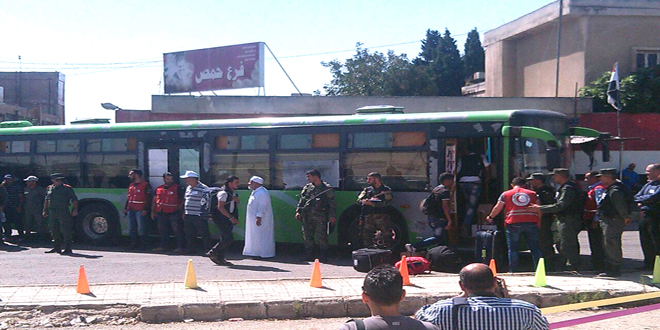 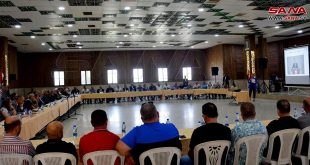 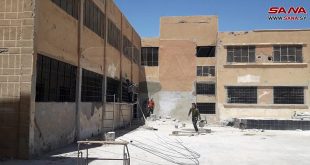 Homs, SANA – Eviction of the third batch of gunmen and members of their families from al-Waer neighborhood in Homs city was completed Monday in the framework of implementing the third stage of the settlement agreement in the neighborhood.

According to SANA reporter, 131 gunmen and 119 members of their families were evacuated and headed towards the northern countryside of Homs.

Minister of State for National Reconciliation Affairs Ali Haidar told SANA in a statement that the Syrian government always keeps its commitments regarding any reconciliation agreement and works on preventing any attempted obstructions from the outside.

He affirmed that al-Waer agreement, which aims at evacuating the neighborhood of weapons and gunmen so that state institutions can operate once again, was accomplished by the Syrian sides without foreign interference.

Homs Governor Talal Barazi told SANA that today, some provisions of the settlement agreement in al-Waer neighborhood will be completed through the evacuation of the third batch of gunmen and their families to the northern countryside of Homs.

The Governor reiterated keenness on speeding up the process of clearing al-Waer neighborhood from arms and gunmen in the framework of the national reconciliation program adopted by the government.

He hailed the significant role of the Hmeimeem-based Russian Reconciliation Center in ensuring a positive climate for the implementation of the provisions of the agreement which was reached last December.

Barazi said that 41 gunmen from al-Waer neighborhood have recently turned themselves in and handed over their weapons to benefit from the amnesty decree no. 15 for 2016 in a “positive step” to implement the aforementioned agreement, adding that the authorities seek to restore some state institutions in the neighborhood soon.

Last Thursday, about 120 gunmen left al-Waer neighborhood along with their families and headed to al-Dara al-Kabira town in the northern countryside of Homs province, and some of the heavy weapons in the neighborhood were handed over to the Syrian state.