Shaaban: The political scene today is in favor of the Syrian state and political settlement 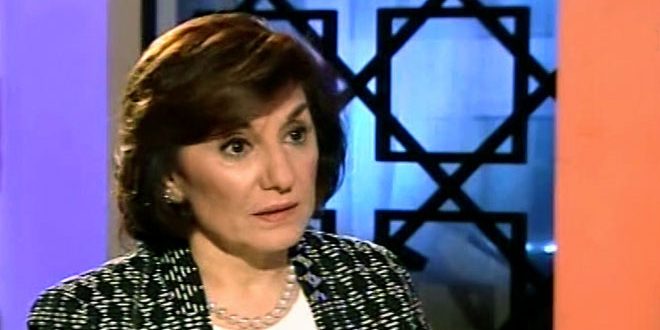 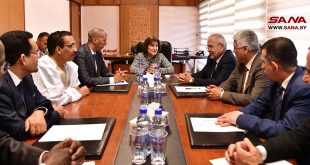 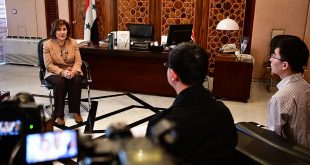 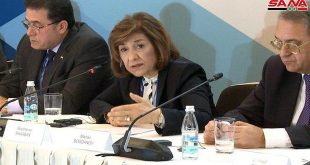 Damascus, SANA – Presidential Political and Media Advisor Bouthaina Shaaban wondered about the fuss made by some UN and other parties about them not being part of the local reconciliations achieved recently in Daraya and al-Moaddamiyeh in Damascus countryside.

In an interview with the Syrian TV aired on Wednesday, Shaaban pointed out that the presence of the United Nations or any other mediator is contingent in any crisis or war.

She clarified that the annoyance expressed by the UN Special Envoy for Syria Staffan de Mistura about the agreement reached in Daraya, where civilians and militants were evacuated, proves that the intentions are not good, reminding that it was the Syrian state who proposed and has always advocated the Syrian-Syrian solution.

Shaaban went on saying that what has been circulated by the “fifth column” on special projects being planned in Daraya is fabrication that only serves Syria’s enemies, affirming that there is no demographic or geographic division in Syria.

Answering a question on why Idleb was chosen as a destination for the gunmen who were evacuated from Daraya, Shaaban affirmed that during “negotiations” with the Syrian state, the gunmen put forth their demands and the state follows the pragmatic principle and acts with flexibility in order to come to stopping the bloodshed.

Asked on whether the Syrian government has decided to close its entire official headquarters in Hasaka in favor of the military wing of the Kurdistan Workers Party (Assayish), Shaaban stressed that the government has not vacated any of its establishments, clarifying that there has been agreement with Assayish to talk about Hasaka and many issues there.

She said any talk about a “separatist project” in Syria is doomed to failure, stressing that there are millions of Kurds reject any separatist projects and are totally against partitioning.

Regarding talk about a Syrian-Turkish deal backed by Iraq, Iran and Russia whereby Aleppo will be under the full official control of the Syrian government in return for allowing the “Euphrates Shield” forces to fight the Kurds, Shaaban said “Syria, Russia, Iraq and Iran are countries committed to principles and they resist Zionism…and
anything they could plan for will be positive and in the interest of these countries and their peoples.”

“There are no secret or suspicious deals or any with burdens unbearable by our people,” she added.

Answering a question on whether there could be a meeting between President Bashar al-Assad and the Turkish President, Shaaban said “What clears the smoke is to strongly believe in the principles followed by the Syrian state. The Syrian state has strategies of stopping the bloodshed and putting an end to this war.”

“The prevailing atmosphere is one of detente…but with the expenses counted,” said Shaaban, adding that there is no talk with the Syrian state about a meeting.”

She indicated that hopes are pinned on the battle field and that the Russian-American agreement would be a reflection of the field.