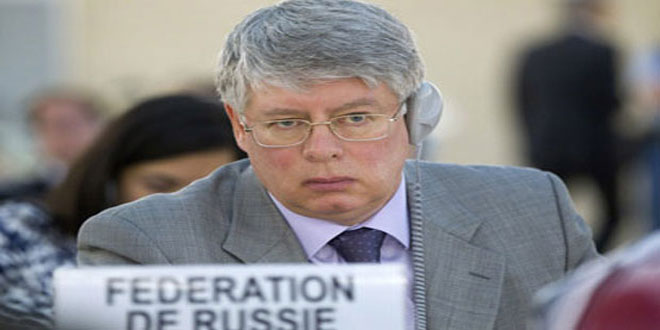 Geneva, SANA – Russia’s Permanent Representative to the UN Office in Geneva Alexey Borodavkin announced that experts from Russia and the United States are discussing ways to strengthen the cessation of hostilities in the city of Aleppo and establish 48-hour humanitarian pauses.

In press statements on Tuesday, Borodavakin said a truce in Aleppo is being discussed by Russian and U.S. military experts with the participation of UN representatives, noting that the Russian side has never questioned the need to enforce the cessation of hostilities in all parts of the Syrian territories, including Aleppo.

The Russian diplomat expressed his regret that some of the terrorist organizations operating under the so-called “moderate opposition” have joined Jabhat al-Nusra and are violating the cessation of hostilities, calling on Washington to practice influence on these organizations to stop their violations.

Russian Diplomat at UN: Humanitarian situation in Syria should not be politicized or used for protecting terrorists

Earlier, Russia’s Deputy Permanent Representative to the UN Vladimir Safronkov stressed that the only way for solving the crisis in Syria is represented through unifying efforts to combat terrorism and resuming political dialogue among the Syrian sides, pointing out that imposing foreign solutions would lead to the continuation of instability in the country.

Safronkov said during a UN Security Council session that the humanitarian situation in Syria should not be politicized and used intentionally or unintentionally for protecting terrorists or other members who make residents of Aleppo human shields and prevent them form leaving the city, in addition to shelling the humanitarian corridors and stealing humanitarian aid.

He also pointed out that Russia has organized, in cooperation with the Syrian government, humanitarian corridors in Aleppo and secured the departure of tens of civilians and a number of gunmen from the eastern neighborhoods of Aleppo through these corridors.

Safronkov clarified that there is a feeling that some states have no desire or willingness or ability to put an end to terrorists in Syria or either separate them from the so-called “moderate opposition”, which is being hided behind crying over the humanitarian situation in Aleppo.

The Russian Diplomat said that the main issue for “Damascus enemies” and those hindering the unification of international efforts is keeping a certain level of tension in the humanitarian side, clarifying that this worry is hypocritical in a view of the unilateral sanctions imposed on Syria and emphasizing that it is time for these sanctions to be abolished to alleviate the suffering of the Syrian people. 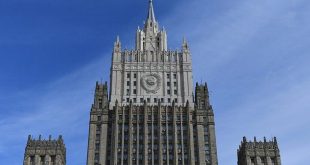