Boroujerdi: We are proud of the Syrian Army’s victories in the war on terrorism 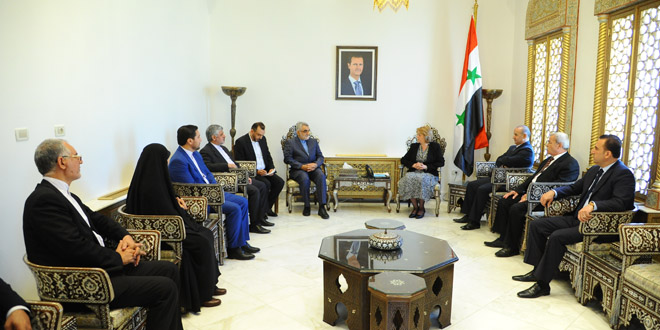 Damascus, SANA – Speaker of the People’s Assembly Hadiyeh Abbas on Wednesday received Chairman of the Iranian Shura Council’s Committee for Foreign Policy and National Security Alaeddin Boroujerdi, discussing with him issues of mutual interests and political and economic relations between the two countries.

The Speaker expressed her thanks for the Iranian leadership, people and government for their supporting stances towards the Syrians.

Abbas stressed on the distinguished historical strategic relations between Syria and Iran which constitute a real guarantor for the future of the region in the face of Western and Zionist greediness.

Boroujerdi underlined the strong historical relations between Syria and Iran, stressing that the bonds between them cannot be broken.

He voiced Iran’s relief and pride in the victories achieved by the Syrian Arab Army in the war against terrorism despite the fact that over 80 countries are involved in the war on Syria, adding that terrorism is backfiring on its supporters in Europe and other states that conspire against Syria.

Boroujerdi said that President Bashar al-Assad is the protector of the Syrian people, voicing pride in President al-Assad’s steadfastness throughout the years of war imposed on Syria. Boroujerdi expressed his confidence that the Syrian Arab Army will return much stronger than before when the war on Syria ends and final victory is achieved, pointing out the war against Syria represents a US-Zionist project.
He noted that the US is backing, arming and financing terrorist organizations and at the same time claiming that it is fighting terrorism.

He pointed out to the close cooperation between the Syrian People’s Assembly and Iranian Shura Council in various fields and in all international forums, expressing his country’s determination to activate and develop all the agreements signed between the two countries.

In a press statement that followed the meeting, Boroujerdi described the meeting as “very useful and constructive”, reaffirming the continuation of Iran’s support for Syria in the face of terrorism and unjust war against it. He affirmed that the Palestinian cause is one of the priorities in the Iranian foreign policy, concluding by saying “We are confident that the Palestinian people who are confronting Israeli occupation in the current Intifada with the simplest tools will achieve victory, and so will the Syrian people in its war against terrorism.”

Earlier, upon his arrival in Beirut, Boroujerdi told reporters that the field victories of the two Syrian and Iraqi armies against the Takfiri terrorism indicate that the compass has become in the right direction by all the countries and governments which are keen on the security and stability of the region and working together for defeating this terrorism targeting the region and its peoples.

Prime Minister Emad Khamis affirmed that Syria will soon achieve victory over terrorism due to the sacrifices of the army and wise leadership in Syria and the support offered by friendly countries, on top of them, Iran.

Khamis, meeting Boroujerdi, appreciated the progress in the economic and trade relations between Syria and Iran, stressing that Syria is determined to combating terrorism and overcoming it in parallel with the efforts exerted to restore the movement of production, investment and joint cooperation with friendly countries.

Boroujerdi, for his part, described the relations between the two countries as strategic and historic, saying that Iran supports the Syrian people against terrorism.

“The latest developments in Aleppo will form a turning-point in the track of the crisis in Syria and terrorism will turn back to its financiers and supporters,”  Boroujerd added.