The 3rd phase of “I belong to” initiative held in Parma, Italy 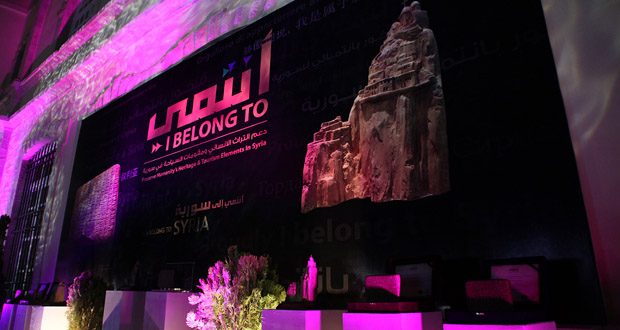 Warsaw, SANA_ The third phase of “I Belong to” initiative was held Saturday in the Italian city of Parma, for the restoration of Syrian heritage sites that has been destroyed by terrorist organizations and their supporters namely the US and its agents in the region.

In 2015, Tourism ministry launched the initiative to invest its national, cultural and religious icons through designing Syrian-themed tokens with historical and cultural indications and placing them in a number of foreign countries in coordination with the Syrian and friendly embassies, communities and organizations, while the revenues of the initiative will be used to support tourism sector and heritage sites in the country.

Syrian Community, National Union of Syrian Students in Italy, European Front to Defend Syria, Italian SOLID organization and the Italian Right political Party participated in the forum where a Syrian tourism ministry-produced movie, on Syrian
ruins, its humanitarian heritage and the destruction caused to them by terrorists of ISIS and Jabhat al-Nusra, was screened at the forum.

SOLID representative said that his organization is working with the Syrian community in Italy regarding I Belong to initiative to support Syrian people and government in restoring what has been destroyed by terrorism on the whole Syrian soil.

Jacob Aslo, a member of Syrian community briefed the situation in Syria before the crisis particularly how the co-existence and security were prevailed, while a member of the European Front referred to his third visit to Syria and showed sample of photos he had taken during the visit. He indicated Syrians’ steadfastness due to the unjust blockade imposed on them as well as the strength and steadfastness of the Syrian Arab Army in combating terrorism for a number of years and its determination to eliminate the last terrorist on the Syrian lands.

In turn, representative of the Italian Right Party said that Syria was and will remain the gate of history and the future.

Meanwhile, Head of Syrian students in Italy Wasim Morshed talked about the deep-rooted history of Syria and sacrifices of the Syrian army and people for keeping their country’s territorial integrity and defending their lands against terrorism.