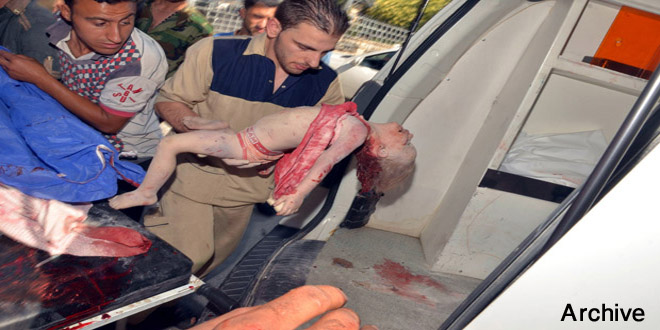 Aleppo/Lattakia, SANA – ISIS terrorists on Friday massacred 40 civilians in the village of Ghandoura in the countryside of Aleppo province on Friday, while a total of five civilians were killed and 29 others were injured due to terrorist attacks with rocket shells and gunfire which targeted Aleppo city.

In a statement to SANA reporter, a source at Aleppo Police Command said that terrorists targeted the neighborhoods of Maysalon, al-Jamilia, al-Ashrafia, al-Midan and Salah al-Dein in Aleppo city with rockets, mortar shells and sniper bullets on Friday, claiming the lives of 3 citizens, including a young girl, and injuring 15 others, including a child.

Later in the day, one civilian was killed and six others were injured due to rocket shells fired by terrorist organizations on al-Zahraa neighborhood, SANA reporter in the city said.

The Russian Center for coordination and monitoring the cessation of hostilities agreement in Syria said that a child was killed, 8 people were injured and 5 houses were damaged on Thursday night when Jabhat al-Nusra shelled Handarat town in the province and al-Sheik Maqsoud neighborhood in Aleppo in Aleppo.

In an statement on Thursday, the Hmeimim-based center said terrorist attacks that targeted different areas in Aleppo in the past 24 hours have left at least 54 civilians dead and 93 injured.

It clarified that the casualties were caused by terrorist groups’ indiscriminate shelling of neighborhoods of al-Sheik Maqsoud, al-Midan, al-Muhafaza and al-Zahraa in Aleppo city and al-Nairab Airport and several towns in the countryside of Aleppo.

Citing the incidents where the cessation of hostilities agreement was violated in the past 24 hours, the Center said there were three breaches observed in Damascus province committed by the terrorist groups.

A 72-hour truce has been established in two towns in Idleb (Kfarhaya and al-Fouaa) and in two other towns in Damascus countryside (al-Zabadani and Madaya), the Russian center pointed out, noting that the truce will start as of Thursday midnight.

The total number of towns that joined the cessation of hostilities agreement has reached 140, according to the Center.

Russian aircrafts had carried 36 tons of humanitarian cargos to the ISIS-besieged Deir Ezzor city, while 3 trucks carrying food products and flour were sent to Deir al-Salib village in Hama province.

The cessation of hostilities agreement, in place in Syria since February 27 in implementation of the Security Council resolution 2268, does not include ISIS, Jabhat al-Nusra and other armed groups internationally listed as terrorist organizations.