Death toll from terrorist attacks in Aleppo rises to 25 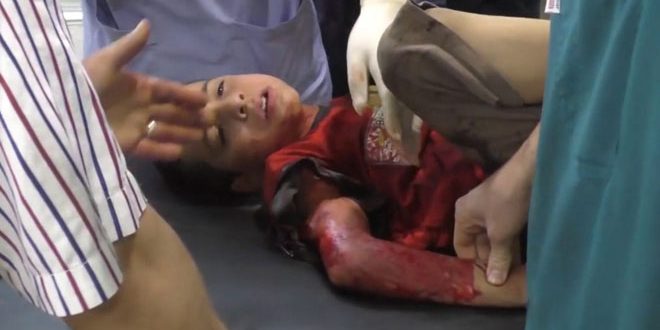 Lattakia/Aleppo, SANA – The death toll from the shelling attacks launched by Jabhat al-Nusra terrorists on neighborhoods in areas in Aleppo province in the past 24 hours has reached 25 people, in addition to tens of others injured.

The Russian Center for coordinating and monitoring the cessation of hostilities agreement in Syria said in a statement on Thursday that terrorists of Jabhat al-Nusra targeted al-Sheikh Maqsoud neighborhood in the city and Handarat town in the northern countryside of Aleppo with various types of shells, claiming the lives of 15 people, injuring tens of others and causing massive material damage to the citizens’ properties.

The Russian Coordination Center said earlier today that five people were killed and 50 others were injured when Jabhat al-Nusra terrorists fired shells on al-Midan neighborhood in the city.

The center, based in Hmeimim, added that Jabhat al-Nusra terrorists shelled during the past 24 hours al-Fouaa town in Idleb, the villages of Ard al-Wata and Rasha in Lattakia, military checkpoints in Hama, Marj al-Sultan town in Damascus Countryside and neighborhoods and houses in al-Menshiyeh area in Daraa city.

Later today, SANA reporter in Aleppo said five civilians among them two children were killed and three others injured in a rocket shell fired by terrorists at al-Sulaimanieh neighborhood in the city.

SANA reporter added that 11 people were injured by shrapnel of explosive bullets fired by terrorist
groups on the neighborhoods of al-Serian al-Qadima, Iskandaron and Baghdad Station and near Saadallah al-Jabiri Square.

The source added that terrorist snipers targeted civilians in al-Ramouseh neighborhood in Aleppo, wounding one person.