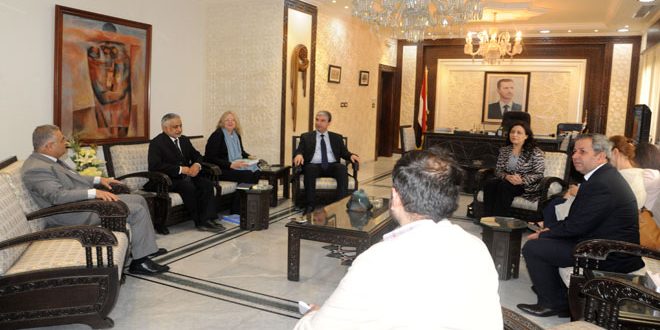 Damascus, SANA – Culture Minister Issam Khalil discussed on Tuesday with a delegation from the United Nations Educational, Scientific and Cultural Organization (UNESCO) the results of the delegation’s visit to the ancient city of Palmyra and its assessment of the damage inflicted by ISIS terrorists.

Means to activate coordination between the Syrian archaeological institutions and the UNESCO to launch the process of restoring the affected monuments and artifacts in Palmyra were focused on during the talks.

In statements to reporters following the meeting, Khalil said assessing the damage caused at the archeological site of Palmyra is being worked on with the UNESCO to prepare for setting up an integrated work plan for restoration.

In turn, Cristina Menegazzi, head of UNESCO’s Syrian heritage emergency safeguard project, said the UNESCO will do its utmost to restore the antiquities in Palmyra through cooperation with the Syrian government despite the difficulties.