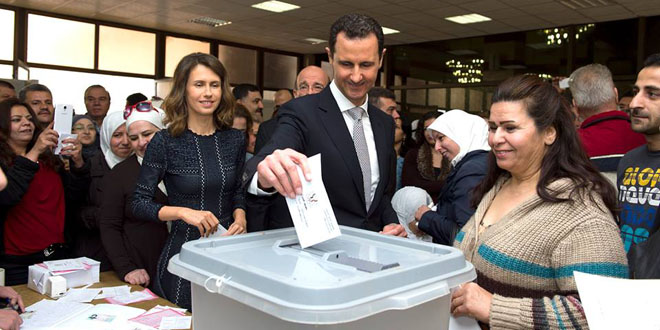 In a statement to the media as he left the voting center, President al-Assad said “the Syrian people are engaged in a war that has been going on for five years, through which terrorism managed to shed innocent blood and destroy much infrastructure, but it failed in achieving the primary goal it was assigned, which is destroying the principle structure in Syria, meaning the social structure of the national identity.” “This is why the terrorists’ employers and masters moved in a parallel direction under a political headline whose main goal is to undermine this social structure and undermine the national identity, which are expressed by the constitution,” His Excellency said.

“The Syrian people have been aware during the past years of that point, which is why we saw the citizens’ enthusiasm to participate in all previous constitutional requirements whether they were the presidential elections or the legislative elections, and this is what we see today as well with the wide-scale participation by all elements of society, particularly in the matter of running for the elections, as this year saw an unprecedented number compared to any parliamentary elections in Syria throughout the past decades,” President al-Assad added. He pointed out that participation in these elections involved all components of society, and at the forefront of them are families that lost their children because of terrorism and families of martyrs and wounded people who sacrificed their lives or bodies in defense of the homeland, adding “the homeland is land, people, and institution, and what brings all these elements together is the constitution.”

“Because of all that, you see us participating today by voting together, which is the first time we do so as the President and his wife, and it’s natural for us to be among those contributing today in this requirement as Syrian citizens defending the constitutional requirement with all that the constitution represents to us, whether as two Syrians or as Syrians as a whole,” President al-Assad said, adding “also, it is natural to witness great enthusiasm among citizens, which is what we saw in the first years of these elections.”