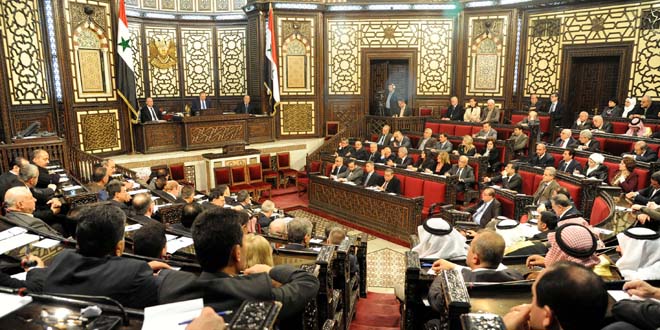 Damascus, SANA – The People’s Assembly discussed in its session on Monday the performance of the Ministries of Awqaf (Religious Endowments) and Education during the current crisis and their efforts to continue the educational process and raise awareness regarding the threat posed by the terrorist Wahhabi mentality.

The Assembly members also condemned the terrorist attacks which took place on Sunday in al-Sayyida Zeinab town in Damascus Countryside and in Homs city.

During the session, Assembly members called on religious figures to focus on the true Islamic values and emphasizing the bright aspects of Islam to counteract extremist and terrorist ideas.

They also called for dealing with the matter of unlicensed private education institutes, integrating new materials into school curricula like laws and rights of families, women, and children, in addition to rehabilitating schools in the areas that have been secured, and focusing on one foreign language in schools rather than overburden students with more than one.