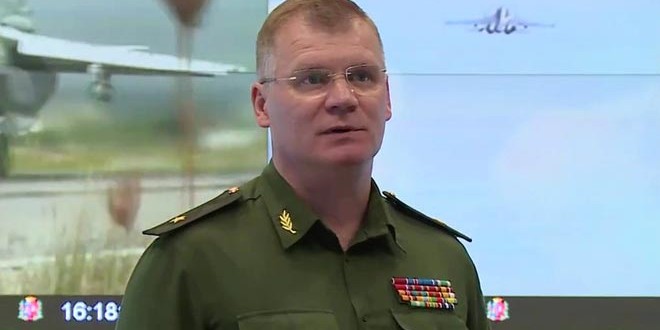 “No Russian warplanes carried out airstrikes in Aleppo city area yesterday. The nearest target engaged was over 20 kilometers away from the city,” Russian Defense Ministry spokesman Igor Konashenkov said on Thursday, adding that “on the contrary, airplanes from the US-led anti-ISIS coalition were active over Aleppo.”

“Terrorists in Syria are trying to flee to Turkey ‘blending into’ civilians of Aleppo as they know Russian warplanes don’t attack peaceful population,” Konashenkov stressed.

“Mass desertion is fixed among gunmen groups operating in the area of Aleppo. Terrorists intimidate local population and use force to drive people to the Turkish border,” he said.

“Dropping their weapons, gunmen are trying to hide among these crowds as Russian warplanes and Syrian government troops never target civilians,” he told reporters.

He pointed out that Russia’s Defense Ministry denies the allegations stated by the Spokesman for the Pentagon, col. Steve Warren that Russian warplanes allegedly bombed two hospitals in Aleppo.

“In his words, with the destruction of the two main hospitals in Aleppo, some 50,000 Syrian have been allegedly deprived of vital services,” Konashenkov said, pointing out that “Warren forgot to mention either hospitals’ coordinates, or the time of the airstrikes, or sources of information. Absolutely nothing.”

Russian airstrikes destroy around 1900 terrorists’ positions in a week

In a relevant context, Russian warplanes carried out 510 sorties and destroyed 1888 terrorist targets in the countryside of Aleppo, Lattakia, Hama, Deir Ezzor, Homs, Daraa, Hasaka and Raqqa between the 4th and the 11th of February, according to the Russian Defense Ministry.

RT website quoted Konashenkov as saying that the Russian warplanes conducted a sortie targeting gatherings of terrorist organizations in the surroundings of Barrouma village in the northeastern countryside of Lattakia, destroying a support center and a mortar launcher.

He added that Russian warplanes destroyed 9 trucks loaded with munitions and 2 armored vehicles and killed over 40 terrorists during a sortie that targeted three vehicle convoys transporting terrorists on Homs-al-Qaryatain road in the southeastern countryside of Homs province.

Russian airstrikes against terrorist positions in Syria started 30 Sep. 2015 upon request from and coordination with the Syrian government.