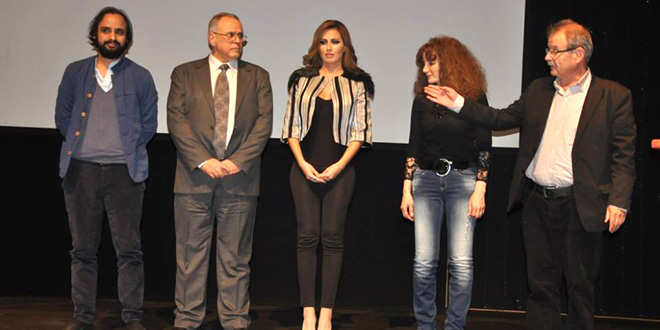 Damascus,SANA – The Youth Cinema and Short Films Festival concluded its activities with a ceremony at the of Damascus Opera Theater in Dar al-Assad for Culture and Arts on Sunday, in which the Festival’s jury announced the winners of the event’s awards. The gold award went to Hebr al-An (Ink Now), directed and written by al-Mohannad Heidar, while Nadine Tahseen Bek won the silver award for her film Rouznama (Calendar), whereas Kinda Yousef won the bronze award for her film Alteco.

The best script award went to the movie Sada (Echo) by director and writer Christine Shahoud, and the award was presented by actress Lina Hawarneh, while director Najdat Anzour presented the best director award to Sondos Barhoum for her film al-Hajez (The barrier).

Actress Fadia Khattab presented the jury’s special award which went to Mohmalat (Litter) directed by Fadel Mheithawy, who also received an opportunity to have a short film produced by the National Film Organization, while the film Sally directed by Zahra al-Boudi got a special mention by the jury.

The documentary al-Nar Wa’l-Yassamine (Fire and Jasmine), written and directed by Mahmoud Abdul-Wahed, was screened during the closing ceremony. The 25-minute documentary showcased the most important activities of the establishments of the Ministry of Culture during the five years of the war waged on Syria and the support provided by the Ministry to writers, the theater, movies, and concerts as a culture of life to confront culture of death and darkness that international terrorism wants to impose on Syria, in addition to touching on how intellectual figures stood in the face of the attack targeting Syria.

The final part of the closing ceremony saw the screening of the six award-winning films, all of which dealt with the crisis in Syria, some symbolically, some using a slice-of-life approach, while others used the documentary approach.