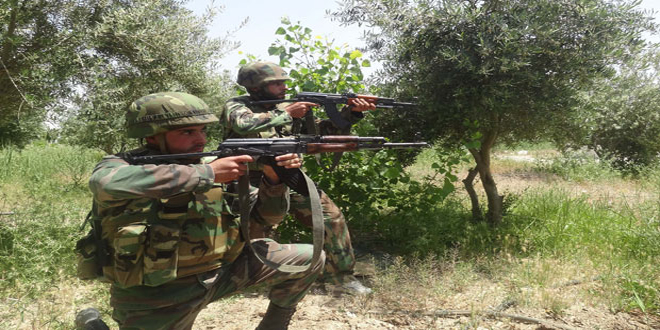 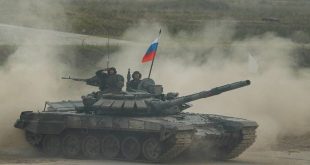 Provinces, SANA- Units of the army and armed forces, backed by the Syrian army air force, eliminated on Thursday numbers of Jabhat al-Nusra and (ISIS) terrorist organizations’ members across the country during military operations against their hideouts and dens.

The strikes followed an accurate information and follow up opeartions for ISIS terrorists’ movements in al-Qaryatain city, to the north and the west of it, and on the sides of the Syria Badiya, 85 km southeast of Homs city.

A number of the terrorist organization’s gatherings, positions and vehicles were destroyed and many of their members were killed in the strikes.

Field sources affirmed that 40 terrorists of the so-called Jaish al-Fatah were killed in army’s operations against their dens in Idleb and Hama countryside.

Meanwhile, the terrorist organizations admitted on their media WebPages that they suffered heavy losses in personnel and equipment and number of their members were killed including Ibrahim Adel Kouraj and Mohammad Nji al-Umar.

ISIS terrorists suffered heavy losses in personnel and equipment in the town and hill, and a machinegun- equipped vehicle was destroyed.

In Sweida western countryside, near the administrative boarders with Daraa province, an army unit destroyed a gathering for Jabhat al- Nusra and terrorist organizations in al –Aslaha village.

Another army unit destroyed last night a number of hideouts for the terrorist  organizations, south of Zanobia School and Police dwellings in Daraa al-Mahatta  neighborhood.

2015-11-26
Reem
Share
Previous No change at USD exchange rate Thursday
Next 7 civilians killed, others injured in terrorist attacks in Aleppo and Hasaka