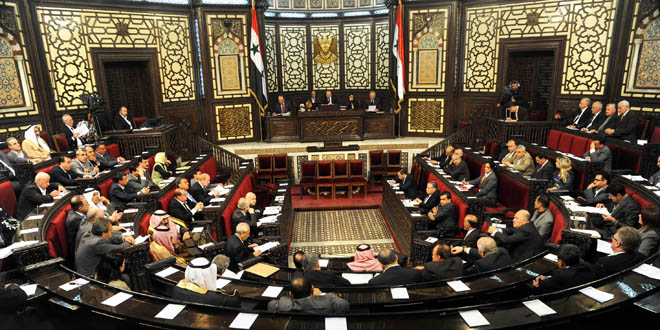 Damascus, SANA- The People’s Assembly discussed during Monday’s session the report of the Budget and Accounts Committee on the bill of the final account of the general budget for the fiscal year 2011.

The total final allocations for the state’s general budget for the fiscal year 2011 was estimated at SYP 835 billion, whereas the actual implementation stood at 82 % meaning that the amount actually spent was SYP 686.994 billion.

The practical implementation of the investment projects stood at 63%, meaning that a total of SYP 208.207 billion was spent on investment and development projects.

Chairman of the Budget and Accounts Committee Hussein Hassoun pointed out the need to increase local revenues, achieve optimal use of available resources, improve the efficiency of tax administration and tax collection, and addressing tax evasion to enable the government to tackle the deficit.

Hassoun called for the rationalization of public spending, the reduction of squandering in expenditures, and speeding up the completion of investment projects.

Minister of Finance Ismail Ismail pointed out in a previous session that the delay in the financial account for 2011 was exceptional due to the circumstances that Syria witnessed, in addition to the inability of some of provinces to provide final figures for their accounts.