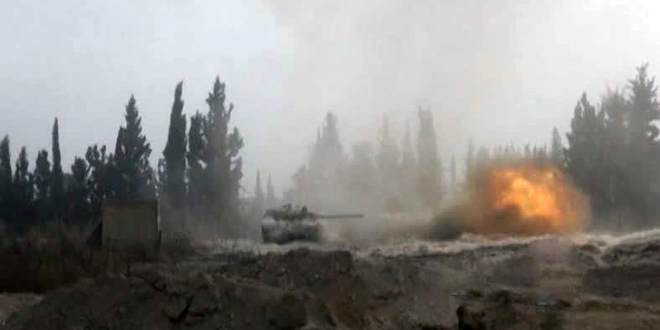 Jaboul under control of the army

Units of the army and the armed forces, in cooperation with the popular defense  groups, established full control over al-Jabboul village in the eastern countryside of the northern  Aleppo province.

A military source told SANA that a unit of the army eliminated the last hotbeds of the ISIS  terrorists in al-Jabboul village in the eastern countryside of the province.

The source added that establishing control over the village came after fierce clashes with the the Islamic State (ISIS)  terrorists as heavy losses were inflicted upon them in the personnel and the equipment.

The forces defending the Air Force Academy also destroyed a den of the ISIS terrorists and killed  all terrorists inside it, and destroyed their arms, ammunition and equipment in the surroundings of  the Academy at the international road leading to Raqqa province.

A number of dens and hotbeds of Jabhat al-Nusra and the ISIS terrorists were also destroyed in the  surroundings of al-Nayrab Airport, Sharba’a and Rasm al-Ghazal in the continued operations carried  out by the army in the southern and eastern countryside of the province.

Heavy losses were inflicted upon Jabhat al-Nusra terrorists in operations carried out by the army  against their hotbeds in the neighborhoods of Bani Zaid, Old Aleppo, al-Ramousa and al-Rashidin 4.

Meanwhile, the Takfiri terrorist organizations acknowledged on their pages on the social networking  websites that a number of their members were killed including the self-claimed leader of the so-  called “Thwar al-Sham Brigade” terrorist Mohammad al-Khatib, and the so-called “Director of the  Local Council in Tal Hdaiyya village” terrorist Fadil Olaiwi and the self-claimed “commander in the  battalion 1 in Hraitan city” terrorist Omar Shamta.

A military source on Saturday morning declared that full control was established over Dahret al-Kassar site in the northern countryside of the southern Quneitra province. The source said in a statement to SANA that a unit of the army, backed by the popular defense groups, established full control over Dahret al-Kassar to the east of Tranja village after carrying out intensive operations against positions of Jabhat al-Nusra terrorists as heavy losses were inflicted upon them in the personnel and the equipment and their remnants fled and left their arms and ammunition.

Meanwhile, field sources told SANA that units of the army, in cooperation with the popular defense groups in Harfa, Hadar and Khan Arnaba, carried out special operations against dens and positions of Jabhat al-Nusra terrorists in the forests of Tranja, Jibbat al-Khashab and Ain al-Bida.

The sources asserted that positions and hotbeds of the terrorist organizations were destroyed in the operations.

Meanwhile, the Takfiri terrorist organizations acknowledged on their pages on the social networking websites that a number of their members were killed in the operations.

Syrian Arab Army units made new advances in their ongoing military operations against terrorists in the villages of Nola, Bala, and Marj al-Sultan in Damascus Countryside, sources on the ground told SANA’s correspondent, adding that the army broke through the terrorists’ defenses and destroyed many of their hideouts and fortified sites along with the weapons and ammo they contained.

The sources said that an army unit destroyed a bulldozer and a car loaded with ammo that were used by terrorists in the farms of Bazina village, eliminating terrorists Mohammad al-Odat from Jordan, Ahmad al-Hindawi from Iraq, Mohammad Dalati, Mahmoud al-Shawwa, and Tassin al-Arouni.

Another army unit destroyed 3 cars used by terrorists from “Jaish al-Islam” in an operation near Barakat mosque in Harasta, which resulted in the death of terrorists Abdelrahman Za’al al-Mazazia from Jordan, Naji al-Yatim, Mahmoud al-Morestani, and Nawwaf al-Hasan.

In Masraba village south of Douma, an army unit targeted hideouts of Jaish al-Islam, killing terrorists Abdelhadi Ghannoum, Mansour Hatem, Fares Ghannoum, and Mahmoud Sweidan, in addition to destroying several vehicles, some of which were equipped with machineguns.

Earlier, an army unit targeted a hideout for terrorists in Daraya in Damascus Countryside, killing at least 7 terrorists and injuring others, mostly from the so-called “Ajnad al-Sham Islamic Union”.

The Syrian Air Force carried out airstrikes targeting concentrations of “Jaish al-Fateh” terrorist organization, destroying them along with machinegun-equipped vehicles in the al-Taminya town and Khan Sheikhoun city in the southern countryside of Idleb province.

A military source said that 13 terrorists from “Ahrar al-Cham Islamic Movement” terrorist organization were killed in a special operation carried out by the army against one of their hideouts outside Benin village in Ma’aret al-Nu’man area.

Meanwhile, local sources said that three leaders from Jabhat al-Nusra terrorist organization, including the terrorist known as “Abu Dujana al-Masri,” were killed when an explosive device went off in al-Zawiye Mountain.

Meanwhile, in the northern countryside of Hama province, the Syrian Air Force targeted dens and vehicles of terrorists and destroyed them along with the terrorists, weapons, and munitions inside them in the surroundings of Maarkaba village.

On a relevant note, sources on the ground told SANA’s correspondent that one of the most notorious and dangerous leaders of Jabhat al-Nusra, a Turk called Ali al-Turki aka al-Muhajer, was killed at the outskirts of al-Mansoura village, adding that al-Turki was the mastermind behind terrorist acts committed by Turkish mercenaries in Hama’s northwestern countryside.

The sources also confirmed that the main headquarters of “Jund al-Aqsa” terrorist organization was obliterated in an airstrike carried out by the Syrian Air Force in al-Latamneh village 35km north of Hama city, asserting that all the terrorists inside it, including the organization’s “emir” or leader Mohammad al-Salem, were killed.

According to the sources, a Syrian Army unit killed Musa’ab al-Ashqar, who was the leader of a terrorist group along with all his underlings in the surroundings of al-Latamneh.

110 terrorists were killed or injured during the army’s operations against Jabhat al-Nusra terrorist groups in the northern countryside of the coastal Lattakia province.

The army’s air force intensified its sorties against terrorist positions during the past 24 hours, destroying supply routes and weapons and ammunition depots in Salam area and the villages of Bshirfeh, Tirtiah, Ekko and al-Mgheiriyeh.

Meanwhile, field sources said 53 terrorists were killed and 57 others were injured, most of those are foreigners, in various areas in Lattakia northern countryside.

The sources cited the names of some of the terrorists killed, including Kamal Sammo, who was leader of the so-called “Zou al-Nourain Battalion”, and Amer Omar, Khaled Omar, Mudtafa Sallo and Mohammad Khaled, who were all leaders within Jabhat al-Nusra.

Terrorists suffered heavy losses in personnel and ammunition after army units had launched strikes against Jabhat al-Nusra positions and gatherings in Daraa al-Balad and Daraa al-Mahatta.

An army unit bombarded a gathering for terrorist organizations in the area surrounding the power station in the northeastern countryside of Daraa, killing and wounding all the terrorists who were gathered there.

Later on, a vehicle for Jabhat al-Nusra terrorists was destroyed after the army hit their gathering in the area surrounding Makass al-Hajar in Daraa northwestern countryside, with several terrorists getting killed in the operation.

Meanwhile, terrorist groups acknowledged the death of 14 of their members in Daraa.

An army unit clashed with a terrorist group that had snuck from the direction of al-Sa’an al-Aswad village in Homs province’s northern countryside towards a military point in al-Mashrafa village.

A military source told SANA that the clash left all members of the terrorist group either dead or injured.

The source said that another unit targeted terrorists’ hideouts near Jawalak village, in Oum Sharshouh, al-Wa’ra, and al-Hilalia west of the town of Talbiseh, which inflicted losses in personnel, equipment, and vehicles upon the terrorists.

A Syrian Arab Army unit repeled a large-scale attack by ISIS terrorists on al-Jafra and Beit Dghaim in Deir Ezzor, destroying two vehicles rigged with explosives before they reached the aforementioned areas, in addition to destroying a BMP armored vehicle along with the terrorists on board. Popular defense groups in Sweida province, assisted by the people of Kanaker area, seized a car loaded with a large amount of weapons and munitions in the western countryside of the province.

A source at the province told SANA that the defense groups set an ambush for the car, a large pickup truck coming from the countryside of Daraa province and carrying around 4 tons of weapons and ammo concealed under crates and boxes for transporting produce.