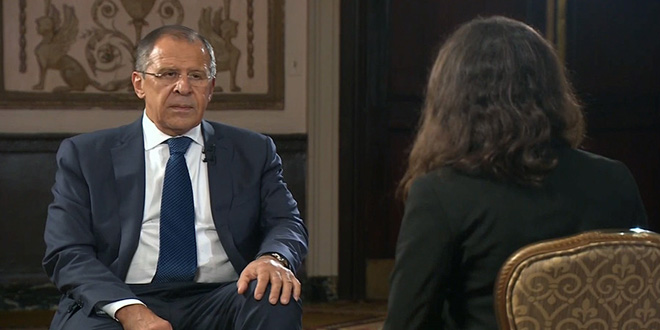 Moscow, SANA – Russian Foreign Minister Sergey Lavrov reiterated the necessity of fighting terrorism in Syria in parallel with conducting political reforms by the Syrians themselves without being imposed from abroad.

The political reforms in Syria should be promoted, but promoted in a way which would not repeat the mistakes of Iraq and Libya, when outside intervention with the purpose of ‘democratization’ of these countries turned out to be an invitation for chaos, an invitation of huge dangers risking the disappearance of these countries, and splitting these countries into three, four, and five smaller enclaves, Lavrov told the Russia Today TV channel on Tuesday on the sidelines of the 70th UN General Assembly in New York.

Lavrov stressed that Russia cannot allow the state of Syria to fail.

When the Syrians reach a consent, based on the Geneva Communique, in June 2012, which called for a political process in Syria based on mutual consent between the government and the opposition, then we believe we will achieve the goal and will make sure that the people themselves determine their future, The Russian top diplomate went on to say.

Lavrov added that our position is that priority number one at this stage is not allowing the terrorists to ruin the Middle East as we know it, to ruin an area, which gave birth to three great religions.

Lavrov pointed out that the Russian President Vladimir Putin and his US counterpart, Barak Obama discussed during their meeting in New York the possibility of cooperation between their countries in finding solution to the most urgent issues, mainly the crisis in Syria, asserting that they agreed on that the main goal is eliminating the ISIS and prevent it from establish a caliphate in the Middle East.

He said that the Americans confirmed that it was absolutely their position that the territorial integrity, unity, and sovereignty of Syria, Iraq and all other countries in the region, is their priority, and on this basis we can cooperate.

Lavrov noted that Russia “suggested the United States and the coalition led by it to calibrate their efforts and to make sure that whatever air strikes they contemplate against terrorist targets on the ground will be coordinated with the efforts of the ground forces.”

“We believe that all those who fight on the ground against the terrorist groups, ISIS and others, must be coordinated. Not necessarily under a single command. This is not realistic, and President Putin made this very clear to President Obama when they met; but coordinating the actual action on the ground and the actual action from the air, because the coalition only engages in air strikes. And those who are functional and active on the ground against ISIS and Jabhat al-Nusra and alike, they are the armies of Syria and Iraq, the Kurdish groups in Syria and Iraq,” Lavrov added.

On Monday, Lavrov told the press, on the sidelines of the UN General Assembly meeting in New York, that Moscow has a strong relationship with both governments of Iraq and Syria and it offers tangible military assistance of them to increase their ability to fight terrorists, asserting that Russia does that without political conditions in contrary of other arms suppliers do.

Lavrov..Russia cannot allow the state of Syria to fail 2015-09-29
admin
Share
Previous French delegation voices support to Syria’s efforts to protect cultural heritage
Next Al-Jaafari: The Russian reading is accurate, no fight against terrorism without the Syrian army