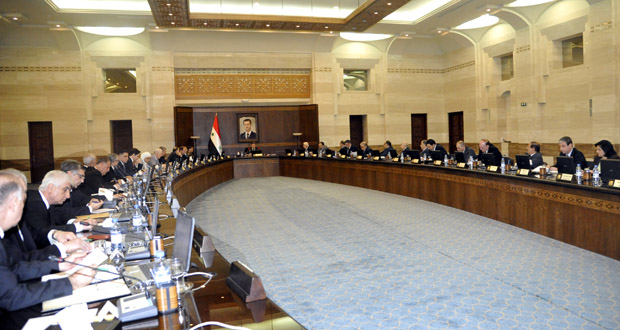 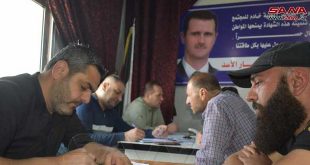 Damascus, SANA – The Cabinet held its weekly session on Tuesday, discussing various services and economic issues including the declining situation of living conditions and services in Deir Ezzor city due to the siege imposed on it by terrorists.

The Cabinet also discussed implementing the decree issued in 2012 to establish a zoning area southeast of Mazzeh area in Damascus, with Prime Minister Wael al-Halaqi saying that the government allocated SYP 20 billion for infrastructure and rent compensation.

Al-Halaqi said that the distribution of heating oil has commenced, with over 8 million liters having already been distributed to around 55,000 families.

The Premier also stressed the need to provide the raw materials needed by local industries, and pointed out to the efforts exerted by the Education and Higher Education Ministries to prepare for the new school year.

For his part, Deputy Foreign Minister for Services Affairs, Local Administration Minister Omar Ghalawanji, said that there has been a gradual improvement in the performance of the services sector, particularly in terms of electricity, drinking water, communications, and relief efforts.

He also reviewed the efforts to limit the spread of diseases common in the summer season, as well as the efforts to deliver aid to Deir Ezzor, noting that several hundred tons of food materials have already been delivered to the city today.