Updated- Army establishes control over areas in Idleb, Hama, destroys hotbeds of terrorists in Aleppo, kills others in different areas 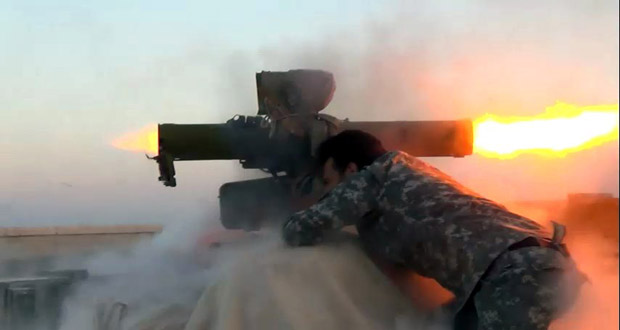 Provinces, SANA-Units of the army and the armed forces on Wednesday continued to tighten the noose around terrorists across the country through launching more military operations against their dens and positions, killing scores of them and destroying their arms and ammunition.

An army unit, in cooperation with Lebanese resistance, killed more than 30 terrorists on the road of Barada- al-Zabadani and the road of al-Zahra Castle to the northwest part of al-Zabadani city in Damascus Countryside.

In the southern countryside of al-Zabadani, local sources confirmed the death of Mouaz al-Abda, one of the ISIS members in the area near to Boukein town.

Terrorist organizations acknowledged on their social media pages the death of many of their members, among them were Louay al-Dalati and Mohamed Ali Rahma.

The sources also clarified that 7 armed men from the so called” Hamza Ibn Abad al-Moutalib battalions” had turned themselves on to the army in al-Zabadani.

In Eastern ghouta, an army unit destroyed terrorists’ hideout in Erbyin town, while another unit killed a number of terrorists in Jobar.

The sources affirmed the death of more than 50 terrorists of “Jabhat al-Nusra” when a workshop for making explosive devices, mortar shells and car bombs exploded in al-Asha’ari farms to the east of Hamouria village.

An army unit killed a number of terrorists in al-Mansoura village, 10km to the west of Aleppo city.

Many terrorists were killed and injured and their arms and ammunition were destroyed by targeting their dens on Wednesday and Tuesday night in Hreitan town, Anadan city, and the surrounding of Nubul and al-Zahra’ towns, located on the road Turkey/Aleppo.

In the southeastern countryside of Aleppo province, army units left all members of a terrorist group affiliated to Jabahat al-Nusra terrorist organization dead and injured towards al-Sfeira/Khanaser, and killed others in al-Nairab village.

Meanwhile, Heavy losses were inflicted upon the Islamic State in Iraq and Syria “ISIS” terrorists in personnel and equipment in the vicinity of the Air Force Academy on the international road leading to Raqqa.

Some media reports asserted death of the terrorist leader “Abu Umar al-Sheshani” who is in charge of the operations in the vicinity of Kweiress airport and al-Sfeira to the east of Aleppo.

on the other hand, the armed terrorist groups confessed that some 23 terrorists were killed in the countryside of Hama and Idleb provinces, many of them of non-Syrian nationalities.

The terrorists pointed out, through their social media accounts, that about 15 terrorists from Chechnya were among the dead.

Meanwhile, terrorists confessed that a leader of a suicidal squad was killed along with 13 of his group members.

The terrorists were killed during clashes with the Syrian army units in the countryside of Idleb and Hama.

A unit of the Army and Armed Forces thwarted an attack by ISIS terrorists on Jazal oil field in Homs province and destroyed their arms, ammunition, and vehicles, some of which were equipped with machineguns.

In the north eastern countryside of the province, a number of Jabhat al-Nusra terrorists were killed and others were injured during army strikes against their dens in Ain Husien village in Ain al-Nisr area 25 kilometers far from Homs.

In al-Waer neighborhood in the western outskirts of Homs city where terrorists from Jabhat al-Nusra and “al-Farouq brigades” are fortified and using thousands of locals as human shields, a unit of army killed a number of terrorists in accurate operations against their gatherings in the 7th and 8th blocks and Rakan hill.

Later, a military source said that army units killed scores of ISIS terrorists in Palmyra city and Wadi al-Mask in the eastern countryside of Homs.

Earlier, the source said that an army unit destroyed ISIS vehicles convey to the north of Wadi Abyad Dam in Palmyra countryside, killing a number of terrorists and destroying a number of their vehicles.
Quneitra

Meanwhile a unit of the army and armed forces killed all members of a terrorist group while attempting to infiltrate from the forests of Jibat al-Khashab village towards Tal al-Qaba’a in the countryside of the southern Quneitra province.

An Army unit killed many terrorists during its intensive operations against terrorists’ gatherings and dens in the outskirts of Jubata al-Khashab, the area surrounding Haraj al-Huria, al-Kisha  and al-Hamidia village. 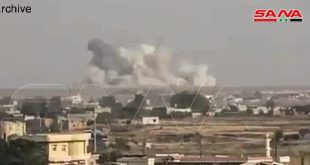