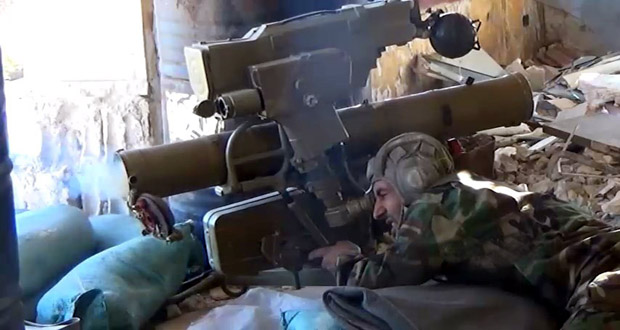 Provinces, SANA – Units of the army and armed forces carried out on Monday military operations against terrorists’ gatherings and hideouts in many areas across the country, inflicting heavy losses upon them in personnel and equipment.

Army units carried out intensive operations against dens of “Jabhat al-Nusra” and “Jaish al-Islam” terrorists in Jobar neighborhood, establishing control over several buildings in the eastern side of the neighborhood towards Zamlka Bridge.

The operations ended with the destruction of a den with all terrorists inside, and killing large number of terrorists who were fortified in the said buildings.

Local sources told SANA reporter that army units targeted terrorists’ dens in Hamuria village and to the west of Ayn Tarma town, killing many terrorists, injuring many others and destroying their weapons and ammunition.

In Zabadani, the army and the Lebanese resistance made significant advancement in the city, seizing control over a number of blocks there and killing dozens of Jabhet al-Nusra terrorists.

In Zabadani countryside, the army killed and injured over 20 ISIS terrorists after targeting their hideout.

In Duma city, an army unit destroyed terrorists’ den, killing and injuring more than 15 members of “Jaish al-Islam” near the municipal building.

Earlier, units of the army and armed forces carried out concentrated bombardments against dens and positions of Takfiri terrorist organizations in the southwestern countryside of Damascus.

A military source told SANA that scores of Jabhat al-Nusra terrorists were killed and their arms were destroyed in operations carried out by the army against their dens in Khan al-Sheeh farms and al-Husainieh al-Gharbyia village.

The army units destroyed  Jabhat al-Nusra mortar launch pads and hideouts in the countryside of the southern province of Quneitra.

The  army units carried out direct blows to Jabhat al-Nusra terrorists’ hideouts in the villages of Jebata al-Khashab and Tranja, about 4km north of Quneitra city.

The source added that army’s blows resulted in inflicting heavy losses upon the Takfiri organizations in personnel and equipment and the demolishing of mortar launch pads, which they were using to target Hadar village.

Jabhat al-Nusra terrorists, positioning in the forests of Jebata al-Khashab and Tranja villages, targeted the village of Hadar with rocket shells, killing a civilian and injuring at least 10 others, among them a child who is critically wounded.

The source said that a number of terrorists were killed; their weapons and ammunition were destroyed in an army unit’s operation against their hideouts in the forest of al-Huriyeh village in the northeastern countryside of the province.

An Army unit eliminated all the members of terrorist group in al-Bitar farm southwest of Daraa city, destroying all their weapons and ammunition.

In the eastern countryside of Daraa, army targeted terrorists’ dens and gatherings in al-Naima, Sidam and al-Yadouda, killing a number of terrorists and destroying vehicles, some of them equipped with machineguns.

An army unit targeted terrorists’ dens and gatherings in al-Karak neighborhood in Daraa al-Balad, resulting in the death of number of terrorists and in destroying their weapons and ammo.

Terrorist organizations acknowledged on their social media pages the death of a number of their members, including Firas Fawaz Farokh and Mohammad Nassir al-Fashtki.

Units of the army supported by the army air force carried out concentrated operations against positions of ISIS terrorists in Aidoun, Aidoun, Unq Bajira, Tuloul al-Homr and Akash in the eastern countryside of Hama province.

A number of ISIS terrorists were killed and their ammunition was destroyed in the operations.

Earlier, dens and positions of terrorists were destroyed and large numbers of them were killed and others were injured in operations carried out by units of the army and the armed forces against their positions in al-Mansoura, al-Ankawi in al-Skailbyia in the northwestern countryside of the province.

Field sources said that units of the army killed scores of terrorists and injured others in the villages of Jisr Beit al-Ras, al-Hwaija,and Kafr Nabouda, 50 km to the northwest of Hama city, and in Khirbet al-Naqous.

An army Unit killed terrorists of the “Islamic State in Iraq and al-Sham” (ISIS) terrorists who tried to infiltrate into Talet al-Makalea in the countryside of Palmyra in the central province of Homs.

Another army unit killed a number of ISIS terrorists in the surrounding of the Citadel and to the north of Tadmour city.

Meawnile, the army eliminated ,in a special operation, several terrorists of the ISIS in Wadi Abyad, destroying a 130-mm cannon in al-Bayarat, 10 km to the west of Tadmour.

An army unit destroyed terrorists’ tunnel in Suleiman al-Halbi area in Aleppo and killed all terrorists inside.

Army units killed and injured scores of terrorists and destroyed a number of their vehicles, weapons and ammunition in the neighborhoods of al-Khaldiyeh, ancient city of Aleppo, Bustan al-Bacha, al-Ashrafiyeh, Karem Mayssar, Karem al-Tarrab, Qastal Harami and Bani Zaid, where terrorists of the so-called Liwa Shuhadaa Bader repeatedly target safe neighborhoods in the city with mortar and rocket shells.

In the eastern countryside of Aleppo, an army unit killed and injured a number of ISIS terrorists in the army air strikes against their gatherings at the surrounding of the Air Force Academy.

A number of terrorists were killed and injured; their gatherings and vehicles were destroyed in Khan al-Assal village in the southwestern countryside of the province, according to the source.

The army bombardment against the terrorists’ gatherings in the villages of Andan and Baianon in Sama’n Mountain area resulted in inflicting heavy losses upon the terrorists in personnel and equipment.

Meanwhile, the source said that the army units killed a number of the terrorist organizations’ members and injured others in Mayer town and at the surroundings of ton of Nubul.

A unit of the Army and Armed Forced carried out intensive operations against the ISIS terrorists who are positioned in al-Zohour neighborhood in Hasaka city.

Army units continued operations against ISIS hideouts in the southeast side of Hasaka city, in addition to achieving significant progress in the direction of the Faculties of Civil Engineering and Economy, tightening its grip on terrorists in the area.

The army’s strikes also targeted ISIS members who were holed up in building blocks east of the road connecting between al-Bassil and Panorama roundabouts in the city, killing and injuring many of them.

The Air Force also targeted with intensive airstrikes terrorists’ gatherings in Tal Salmo, north of Khashir, and al-Majas in the southeast countryside of Idleb, destroying a number of their vehicles and killing many of them.

In Jisr al-Shoughur countryside, an army unit destroyed 4 vehicles with all terrorists and ammo inside them in Zaizon al-Mohdatha area and Tal al-Sahan near the administrative border between Hama and Idleb provinces and killed scores of terrorists in the areas of Kansafra, al-Bara, Mahambal, Qastoun and near Jisr al-Shoughur Hospital.

The Army’s Air Force destroyed dens and vehicles for terrorist organizations in a series of strikes in Tarden, ain al-Ghazal, Bait Hasan neighborhood and Nahshbeh in the northern countryside of Lattakia province, a military source said.

Units of the Army and Armed Forces killed 30 terrorists from Jabhat al-Nusara in Bait Awan, al-Durra, and Ablaq villages in al-Rabea area in the province’s northern countryside, most of them of foreign nationalities.