Army establishes control over sport city and the culture house in Hasaka, Kills more terrorists across the country 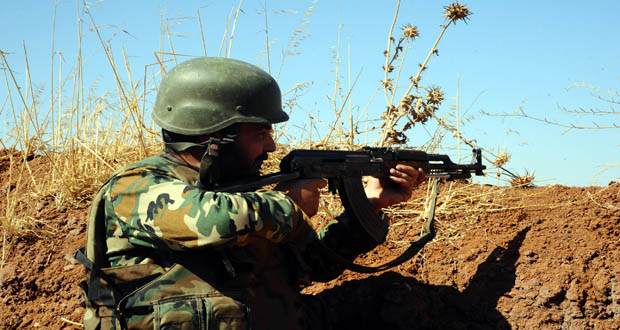 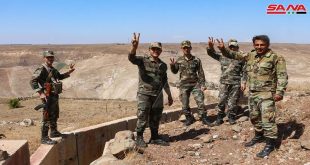 The Syrian army and the Lebanese resistance clashed with terrorists in several areas in Zabadani and established control over a number of blocks in the southern and central parts of the city.

In the eastern al-Ghouta, an army unit destroyed a lorry loaded with terrorists in the area between Deir al-Asafir and Zibdin.

The army also destroyed terrorists’ hideout and two of their vehicles in the farms of Deir Salman, killing a number of terrorists and destroying their weapons and ammunition.

Two snipers of the terrorist organizations were killed in the Camp area, while  two of their cars were destroyed with all terrorists on board and weapons and ammunition  inside them to the east of the electricity company, in Daraa al-Balad neighborhood, a  military source told SANA Sunday.

The source added that an army unit carried out concentrated operations against the Takfiri  terrorist organizations’ gatherings, which resulted in demolishing a vehicle, killing all  terrorists on board to the east of al-Qaser al-Abyad site in the eastern parts Daraa city.

Another army unit carried out precise operation against positions of Jabhat al-Nusra-linked  terrorist organizations in the eastern neighborhood of Bosra al-Sham city, about 40km east of  Daraa city.

In turn, army air force killed a number of terrorists and destroyed their dens and vehicles which are equipped with machineguns at south side of Daraa al-Balad , al-Nuymeh and south Kuhail in Daraa countryside.

The army air force launched strikes against terrorists’ gatherings in Abu al-Dohour town in the far southeast of Idleb province, killing many terrorists and destroying vehicles equipped with machineguns.

In Ma’aret al-Nou’man, the army air force destroyed terrorists’ hideouts and vehicles, killed many of them and injured many others.

Army units killed all members of two terrorist groups affiliated to “al-Fateh Army” in Tal al-Sahn and the area surrounding Zaizoun dam near the administrative border between Idleb and Hama provinces.

The Army air force destroyed terrorists’ hideouts and killed dozens of terrorists in Salma town and the area surrounding it in Lattakia northern countryside.

In the central province of Homs, the army targeted ISIS hideouts to the east-south of Palmyra city in Homs eastern countryside and killed and injured a number of terrorists.

The army also destroyed hideouts for Jabhet al-Nusra terrorists in Kifr Laha, Taldo and Tallat Aqrab to the north-west of Homs.

Army units destroyed terrorists’ hideouts and concentrations in al-Ankawi, Akash and Rasm al-Awyed in Hama countryside, killing and injuring scores of Jabhet al-Nusra terrorists and destroying their weaponry and munitions.

The army also killed and injured a number of terrorists in the village of Aqrab in Hama’s west-southern countryside.

In Deir Ezzor countryside, the army eliminated a number of the ISIS terrorists after targeting their hideouts in al-Jafra village.

Units of the army and internal security forces supported by the national forces continued advancement in hunting ISIS terrorists in some areas where they had been positioned since they infiltrated to them on June 25th.

Local sources in Hasaka told SANA reporter that a unit of the army and internal security forces achieved a new advance in the war against ISIS terrorist organizations and established control over sport city and the culture house which are located to the south of the road linking Ghweiran neighborhood and the electricity company roundabout in al- Nashwa al-Sharqiya neighborhood.

Units of army supported by the national forces achieved, over the past weeks victories represented in destroying a number of bomb cars for ISIS terrorists, establishing control on al-Laiyleih and Ghweiran neighborhoods and buildings that surround the cemetery in the southern outskirts of the neighborhood paving the way for the displaced families to return back home.

Meanwhile, after army restored stability and security to al-Nashwa al-Sharqia and al-Laylia neighborhoods, locals of those neighborhoods return to their houses, the reporter added.

The sources confirmed the death of many ISIS members, some of them snipers who were positioned in the Sports City and the House of Culture.

The Army also established control over the Children’s Hospital, Faculty of Literature, al-Nashwa villas and the Youth Residence, eliminating a number of ISIS terrorists on al-Bassel roundabout, al-Zouhoor neighborhood, and the Water Projects area.

In a statement to SANA reporter, Hasaka Governor Mohammad Zaal al-Ali affirmed that the army aided by national allied forces is in the last stage before announcing Hasaka city totally safe.

More than 700 ISIS terrorists were killed during the army operations, according to al-Ali.

army 2015-07-27
hala
Share
Previous A civilian killed, ten injured in terrorist rocket attack in Quneitra
Next President al-Assad: The priority is eliminating terrorism wherever it is found in Syria