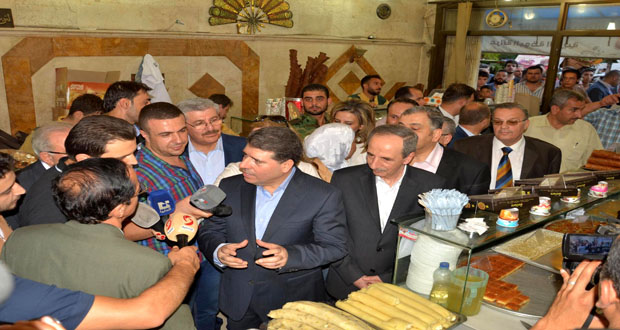 Aleppo, SANA – Prime Minister Wael al-Halqi announced on Thursday SYP 4.625 billion in support for Aleppo province, while he was on a visit there heading an economic ministerial delegation.

This amount of money has been allocated by the Premier as follows; 200 million for accomplishing Hama-Aleppo highway, 1 billion for paying the salaries of Aleppo City Council, another 1 billion offered to the Governorate and 500 million in contribution to the independent budget of Aleppo.

650 million were also offered to the reconstruction subcommittee for the rehabilitation of roads, facilities, public buildings and parks and equipment and machinery, in addition to fixing the traffic system in Aleppo.

Acting upon President Bashar al-Assad’s directives, al-Halqi also announced that 10 inter-city buses and 3 new ambulances will be given to Aleppo governorate.

Earlier on the day, al-Halq inspected the situation of Aleppo markets on a field visit where he checked on the purchase and sale movement and the availability of food supplies.

He spoke to a number of citizens, shop owners and merchants who briefed him on the situation of the markets and their livelihood concerns.

Premier al-Halqi also met with industrial, economic, commercial and business figures through whom he wanted to get better acquainted with the situation of their sectors. The Prime Minister applauded the businessmen and other economic figures who opted to stay in Aleppo and stick to their facilities and businesses in defiance of the terrorist attacks, calling on those who were forced to leave the country to come back and contribute to renovating the national industries, particularly after the government has created the favorable environment for empowering them through rehabilitating the industrial cities and the infrastructure in parallel with further supporting the national product.

At the end of the meeting, al-Halqi and the ministers accompanying him replied to some inquiries related to paying compensations for damage caused to facilities and providing the basic requirements for running factories such as water, electricity and fuel at al-Sheikh Najjar Industrial City, in addition to issues related to facilitating the process of
importing raw materials and rescheduling of loans.

Deputy Prime Minister, Minister of Local Administration Omar Ghalawanji said a file has been prepared for supplying al-Sheikh Najjar Industrial City with water at a value of SYP 100 million, equipping 8 electricity converter centers, setting up an electricity cable of 66 kilowatt and restoring telephone communications, in addition to setting up a plan for providing internal and external protection to the Industrial City.

He noted that SYP 2.300 billion have been disbursed to Aleppo Governorate in compensations for damages.

Minister of Finance Ismael Ismael said the Ministry is working on rescheduling fees imposed on industrialists and amending Decree No. 213 to this effect.

The Prime Minister participated on Wednesday in a Ramadan Iftar (fast-breaking) banquet held by Aleppo Governorate to honor families of martyrs and injured members of the Syrian army.