The army foils terrorists’s attacks in the North, targets their supply routes in southern region, kills ISIS terrorists in other areas 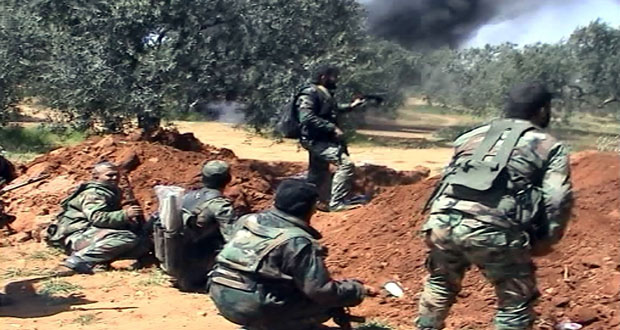 Provinces, SANA-The army and armed forces targeted on Saturday positions and gatherings of different terrorist organizations in the country, while the army air force raided several hideouts of the Islamic state in Iraq and Syria (ISIS) mercenaries.

Several hideouts and gatherings of Jabhat al-Nusra terrorists were hit in army airstrikes in Um Walad village in the eastern countryside of Daraa province, southern Syria.

The strikes left tens of terrorists killed and some of their vehicles, with machine guns mounted on them, destroyed, according to a military source.

SANA quoted the source as saying that army units carried out operations against Jabhat al-Nusra hideouts in the towns of Bosr al-Harir and Kahil in the province, leaving many
terrorists dead and destroying their weapons.

Meanwhile, operations targeting terrorists’ movements and supply routes across the Jordanian border continued, during which many terrorists were killed in an area in Daraa al-Balad neighborhood in Daraa city and in al-Tibeh village near the

In Quneitra province to the west of Daraa, the army targeted terrorists’ positions in the villages of Batineh and Mas’hara in the eastern countryside of the province, leaving many killed.

A military source told SANA that units of army and armed forces thwarted terrorist  organizations attempts to attack military posts in the countryside of Idleb and Hama provinces, killing and injuring scores of terrorists.

Earlier Saturday, SANA reporter said army units foiled an attack by Jabhat al-Nusra terrorists on military posts in Maarkaba, al-Lahaiya and Khirbet al-Masasneh in, leaving many of them killed and wounded.

The strikes killed dozens of terrorists, most of them from Jabhat al-Nusra and destroyed a large number of vehicles equipped with heavy machine guns.

In the neighboring Homs province, an army unit carried out concentrated operations against hideouts of ISIS terrorists in the village of Rahoum in the eastern countryside, killing a number of them and destroying their weapons and ammunition.

Other army units continued military operations against gatherings of Jabhat al-Nusra terrorists in the villages of Ghajar Amin and Ein Hussein al-Janoubi and al-Rastan city in the northern countryside of homs, killing a number of the terrorists.

An army unit thwarted terrorists’ attempt to infiltrate Tsanin village in Homs countryside, killing and injuring all of the assailants.

In Homs eastern countryside, the army continued its operations against the ISIS concentrations and positions, eliminating a number of ISIS terrorists near Jazal petroleum field and dismantling a number of explosive devices planted by terrorists in al-Furughluis area.

Dozens of terrorists were killed and their vehicles were destroyed in army air strikes in Hreitan and Khan al-Asal in the countryside of the northern Aleppo province.

Army units also targeted terrorists’ hideouts and vehicles in al-Ashrafyeh, al-Zaitoun roundabout, Raitan, al-Sheikh Saeed, Bani Zaid, Hanano, al-Sakhour, and near the Air Force Academy in Aleppo and its countryside, killing a number of terrorists in the process.

A unit of the army destroyed one of the terrorist organizations’ stores of ammunition in Joubar neighborhood in Damascus countryside.

Earlier, another army unit clashed with a terrorist group from Jabhat al-Nusra organization in al-Khazrajyia village in the southwestern countryside of Damascus.

All members of the terrorist group were killed in the clashes and their arms and ammunition were destroyed.

Meanwhile, the army air force carried out a number of airstrikes against dens and hideouts of “ISIS” terrorist organization and their positions in al-Mrai’ayia village and in Hwaijat al-Mrai’ayia in the eastern countryside of Deir Ezzor province.

Scores of the ISIS terrorists were killed in the airstrikes and a number of their vehicles that were equipped with heavy machineguns were destroyed, in addition to destroying their arms and ammunition.

Units of the army also carried out operations against dens of the ISIS terrorists in the neighborhoods of al-Erfi and a-Sina’aa, leaving a number of terrorists dead and injuring others, in addition to destroying a number of the machinegun-equipped vehicles and others loaded with ammunition.