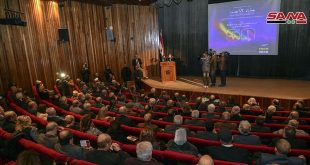 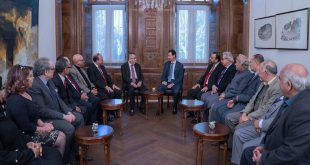 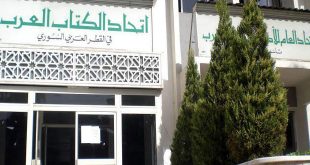 Damascus, SANA –The heinous crimes and massacres committed against the Syrian and Iraqi peoples represent a new Nakba and an extension of the Palestinian People’s Nakba of 1948, Chairman of the Arab Writers Union Hussein Jummaa said.

Jummaa added, in a seminar organized by the Arab Writers Union in cooperation with the alliance of Palestinian factions in Damascus on Wednesday, that the armed terrorist organizations’ brutal acts of killing, demolishing and intimidation against the Syrian people are similar to the western-backed Zionist crimes against the Palestinian people.

He called for unveiling the Israeli falsifications and lies against Palestine and its attempts to Judaize everything in Palestine.

Hussein called for confronting the Takfiri Zionist terrorism as a “sacred duty” to save Arabism, Islamic and Arab and Islamic culture and to foil the reactionary-Zionist-imperialistic schemes targeting the Arab Nation.

For his part, Secretary of the alliance of the Palestinian factions Khaled Abdul Majeed said that the western-Zionist conspiracy against Syria came due to Syria’s pan-Arab stances in defending the Palestinian cause.

Member of the Union’s executive bureau Malek Sakkour pointed out that terrorist organizations acts of killing, demolishing and intimidation against the Syrian people will not dissuade them from facing terrorism and supporting their brave army till defeating terrorism.

The seminar coincided with the Palestinian people celebrations marking the 67th anniversary of May 15th Nakba.