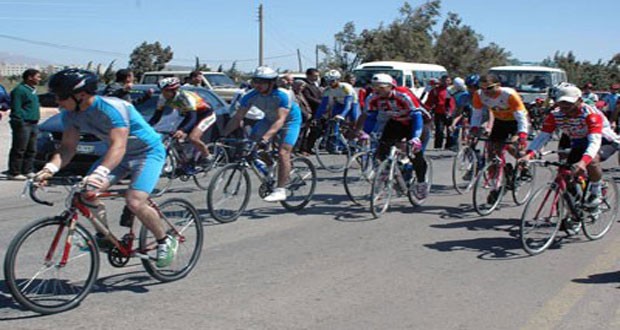 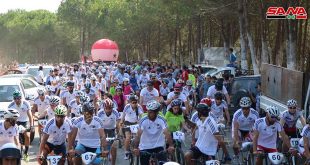 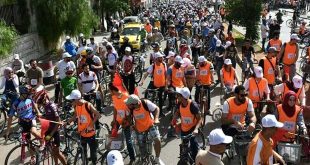 Cycling for peace in Homs

Tartous, SANA Nearly 51 cyclists representing Damascus, its countryside, Homs, Hama, Aleppo, Lattakia, Sweida and Tartous and the local Administration Board took part in the Republic Cycling Championship for men, youth and under-23 categories which kicked off in Tartous on Thursday.

Cyclist Nazir al-Jaser ranked first in the 1st phase of the championship which included of 40-km single for men on Tartous-Safita route, Yalmaz Habash came second and Hazem al-Husseinj won the third place. In the under-23 category, cyclist Omar al-Halabi won the first position, Qudwan Bunasir came second and Ali Ali was third.

Chairman of the Syrian Arab Cycling Federation (SACF) Mohammad Khedur told SANA that the cycling championship has been affected by the crisis , asserting that the SACF continued to organize the races to show the Syrian people’s steadfastness
and their support to their leadership and army against those who attempted to destroy Syria.

Participants in the Championship stressed that organizing such championships during the crisis is an evidence of the Syrian people’s rejection of surrendering and an assertion of their support to their army and leadership. General Sport Union in Tartous city on Friday held a festival of long-distance swimming with the participation of 65 swimmers from Damascus, Aleppo, Deir Ezzor, Lattakia, Tartous. 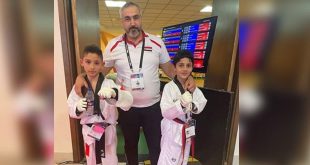