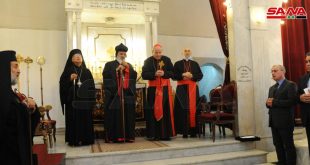 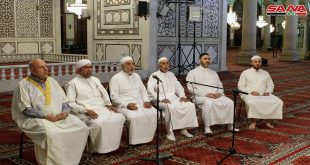 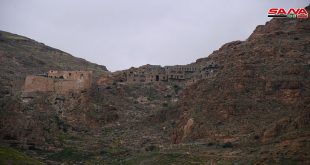 Monastery of saint Moses…destination for prayer and contemplation

Damascus, SANA A prayer was held at the Orthodox Church of Saydet El Niyah Church (Our Lady of Niyah) in al-Zaitoun quarter in Damascus on Monday on the occasion of the World Day for Prayer and Fasting for Peace in Syria.

Pope Francis has called, in 2013, for a day of fasting and prayer for peace in Syria, in the entire Mideast region.

Greek-Melkite Catholic Patriarch of Antioch and All the East Gregorios III Laham, who chaired the prayer, said We hold this prayer for security, safety and peace in Syria, hoping that God will
give back security and peace to the country.

The event was attended by heads and representatives of the Christian sects in Syria, Monsignor Mario Zenari, the Apostolic Nuncio in Damascus and Archbishop Cyril Vasil, Secretary of the Congregation for the Oriental Churches who is in a current visit to Syria delegated by Pope Francis.

From the very depths of our suffering and pain in Syria we cry out with our suffering people, who are walking on the bloody way of the cross, and appeal to the whole world: Enough of war on Syria! Patriarch Laham cried, calling all the countries which are waging war against Syria and sending the so-called Jihadists to it to stop this
catastrophe .

Expressing the unity among all spectrums of the Syrian people, His Beatitude, voiced the Christians commitment to their homeland.

The patriarch urged everyone to stay, to be patient, strong, always to hope and to hang on to hope, faith and trust in God’s.

Patriarch Laham hailed the resilience of the Syrian people in the face of terrorism.

Patriarch Laham called on Pope Francis to help the Syrian people and to set an initiative for a road map that ends the crisis in Syria, stops arming, ends violence, terrorism, kidnapping, chaos and
the killing in Syria, particularly in Hasaka, as well as in Iraq and Egypt for achieving reconciliations and launching dialogue to restore
security, safety, fraternity and peace.

He prayed for God to protect Syria, its army and leader, calling for releasing the two kidnapped bishops Yohanna Ibrahim and Paul Yazigi.