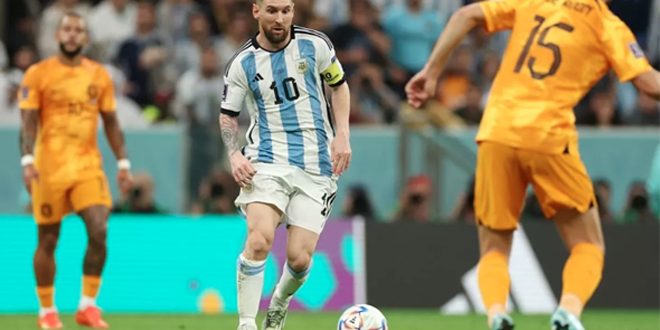 Doha, SANA-Argentina beat the Netherlands 4-3 in a penalty shootout to keep Lionel Messi’s World Cup dream alive on Friday after the Dutch had snatched a 2-2 draw from the jaws of defeat in an extraordinary quarter-final.

Emiliano Martinez saved the first two Dutch penalties to give Argentina a huge advantage, and Lautaro Martinez sent Andries Noppert the wrong way to set up a date for the South Americans with Croatia in the semi-finals on Tuesday.

Messi celebrated with arms aloft in front of the massed ranks of Argentina fans, his hopes of securing football’s biggest prize at the fifth attempt intact for a few more days.

A third bench-clearing melee of the match took place behind him as some of the Dutch players, distraught after coming so close to one of the greatest comebacks in World Cup history, clashed with their Argentine rivals.

Apparently on their way home at 2-0 down with only seven minutes of normal time remaining, the Dutch scored twice through substitute Wout Weghorst to send the match to two scoreless periods of extra time.

Messi, almost inevitably, had played a major role in giving Argentina their lead.

While it was Nahuel Molina’s goal that put Argentina ahead in the 35th minute, it was Messi who unlocked a suffocating Dutch defence that had snuffed out any previous chances.

The 35-year-old took the ball 40 meters out and ghosted to his left in front of a wall of markers before sliding a pass back to the right to Molina on the edge of the box.

The wingback took a touch and poked the ball past onrushing goalkeeper Andries Noppert to send the vast majority of the 88,235 crowd at Lusail Stadium into paroxysms of delight.

There was more delirium for the Albiceleste faithful in the 73rd minute when Messi slapped a penalty kick in the right midriff of the net after Denzel Dumfries had fouled Marcos Acuna on the edge of the box.

With tactics more reminiscent of Sunday park football than Total Football, the Dutch got back into the contest by bombarding the Argentine area with high balls aimed at their tall target men.

They were rewarded with a goal in the 83rd minute when Steven Berghuis crossed from the right and his fellow substitute Wout Weghorst headed the ball past Martinez’s dive.

The Argentines held onto their lead until 11 minutes into stoppage time when Teun Koopmeiners cleverly reversed a free kick and found Weghorst free to put the ball past Martinez and level up the match.

The Argentines were shell-shocked by the turnaround in the first period of extra time but recovered their composure to pepper the Dutch goal with shots, Enzo Hernandez coming closest to scoring with a rasping effort that hit the post.

The defeat was the first for the Dutch in 20 matches going back to last year’s European Championship and brought an end to 71-year-old Louis van Gaal’s third spell as coach.

2022-12-10
m.eyon
Share
Previous Ambassador Khaddour: some countries involved in bringing terrorism to Syria used drugs as tool to fund their activities
Next Nebenzia: US soldiers operate the HIMARS missile systems for the Ukrainian regime