Provinces, SANA – Terrorist organizations in various areas seem to be reeling from the Syrian army’s recent victories in the southern region, with the military operations on Thursday resulting in more deaths and equipment losses within those organizations’ ranks.

Units of the army and armed forces continued their operations in Daraa countryside, eliminating entire members of a terrorist group in al-Jalohia in al-Lujat al-Sharqi area, a military source told SANA.

Unit of Army killed and injured many terrorists in Tafas town, another Army unit eliminated Takfiri terrorists in al-Mzirib town.

Units of the army and armed forces killed Thursday many of Islamic State of Iraq and Syria (ISIS) terrorist organization’s members in the eastern countryside of Hasaka province.

SANA reporter in the northeastern province said an army unit, in cooperation with popular defense groups, clashed with ISIS terrorists in Mafraq al-Bitrol area, 30 km to the east of Hasaka city.

Large numbers of ISIS members were killed, others were injured and many of their vehicles were destroyed during the clashes, SANA reporter confirmed.

Army continued its intensive strikes against takfiri terrorist organizations’ positions in various areas in the central province of Homs.

A military source told SANA that an army unit clashed with terrorists, most of them are members in the so-called “Jabhat al-Nusra” and “al-Farouq Battalions” organizations, who were positioned near al-Andalus Hospital and Burj al-Arbaeen in al-Waer neighborhood in Homs city.

During the clashes, many of the terrorists were killed, others were injured and their ammunition and weaponry were destroyed, the source added.

Other army units carried out a special operation in which they mined and blew up a terrorists’ den that contained advanced technical communication devices to the northeast of al-Msheirfa al-Shamaliyeh village, 80 km east of Homs city.

The army also targeted with a variety of weapons gatherings of terrorist organizations in al-Sultaniyeh and the western hills surrounding Mas’ada village in the eastern countryside of Homs, leaving many of the organizations’ members killed.

Army units stroke hard on dens of terrorist organizations of Jabhat al-Nusra and Ahrar al-Sham to the west of the northern province of Idleb, killing and injuring many of their members in Kourin, Sahl al-Rouj area and Tal Ghazal village, south of Idleb-Lattakia highway, a military source said.

Fifteen terrorists from different nationalities were killed in the operations and tens others were injured, Ahmad al-Kahatib, Omar Shanabo, Mohamed Khalaf, Yousef Kosa and Wadah al-Wadah were identified among the dead.

Another number of terrorists were killed in al-Zara village to the north of Sahl al-Ghab on the border with Hama, the source was quoted as saying.

An army unit destroyed a den for terrorists in Tal Salmo in Abu al-Duhour area and Killed others in al-Majas in the same area.

In another context, some social media pages reported news about a blast that took place inside a workshop which terrorists had been using to manufacture explosive devices in Kfarrouma town in Idleb countryside. A number of terrorists were killed in the explosion, including Mosa’b Abdul-Aziz al-Rahmon. 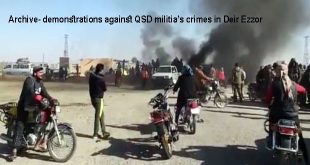