Moscow, SANA-Nikolai Patrushev, the Secretary of the Security Council of the Russian Federation, said that the terrorist organizations, existed in some Syrian and Iraqi lands have weakened and decreased their activity, and they began to be active in other places and countries.

despite the big weakness suffered by international terrorist organizations in Iraq and Syria, they are changing their tactics and expanding their activities in new directions, Patrushev said during a meeting of the secretaries of the security councils of the countries of the Shanghai Cooperation Organization in the capital of Uzbekistan (Tashkent).

The countries most affected by terrorism among the members of the Shanghai Cooperation Organization are India and Pakistan, Patrushev added.

On the 16th of August, the work of the Second Economic Forum of the Shanghai Cooperation Organization was launched in the Uzbek capital and lasted for two days. 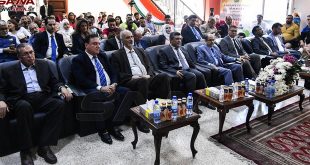