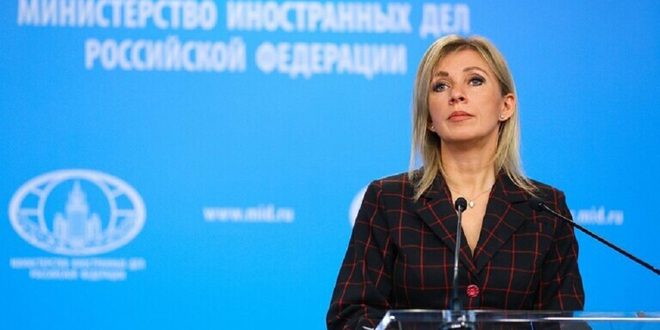 Moscow, SANA- Russian Foreign Ministry Spokeswoman Maria Zakharova slammed as irresponsible on Wednesday the decision by the United Nations Department of Safety and Security to cancel a visit to the Zaporozhye nuclear power plant by an International Atomic Energy Agency mission (IAEA).

“The United Nations played a negative role here – it was a strange role, not something that was not even constructive, in my opinion, a role that raised even more questions,” Zakharova was cited by Sputnik Agency as saying.

“The visit, the inspection, never happened. And then the Kiev regime interpreted the international organization’s stance as absolutely green lights to start shelling the Zaporozhye NPP. These moves are not only ill-considered or prohibiting, these are irresponsible moves that led to those consequences.” Zakharova added.

The Russian diplomat said the United Nations Secretariat “should realize that the world is walking on thin ice.”

“These are not risky experiments being made by researchers for the sake of peace and progress in search for alternative energy resources. These are criminal actions by the Kiev regime as part of its absolutely illegitimate activity which is destructive, and the consequences will not be limited to any geographic location,” Zakharova warned.

She wondered how the UN Secretariat failed to make it clear to those officials who seemingly act under pressure from other countries or make a correct decision.

“The decision to cancel [IAEA Director General Rafael] Grossi’s visit to the Zaporozhye NPP with an international inspection is irresponsible and is fraught with a range of highly dangerous consequences,” Zakharova reiterated.