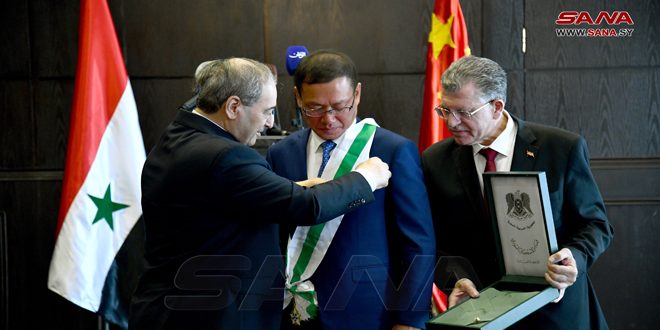 Damascus, SANA-President Bashar al-Assad on Wednesday awarded Ambassador Feng Biao the Syrian Order of Merit of the Excellent degree in appreciation of his efforts to develop and enhance the Syrian-Chinese relations. Foreign and Expatriates Minister, Fayssal Mikdad, who awarded the Ambassador the order of Merit at a Farwell ceremony, said that President al-Assad decided to offer the Chinese ambassador this order of Merit in appreciation of his efforts to enhance relations between Syria and China.

Mikdad hailed the important role played by the Ambassador in light of the difficult conditions to which Syria has been exposed in order to boost different aspects of Syrian-Chinese relations, describing these relations as strategic.

He said that the world is facing threats from every side, which  necessitate solidarity among all good forces to preserve the international stability and peace, referring that China is one of the countries that contributed to protecting international peace and security.

Mikdad hailed China’s stance in support of Syria and peoples of Asia, Africa and Latin America and the developing countries, clarifying that the  Syrian- Chinese advanced relations came as a fruit of great efforts exerted by many generations in the two friendly countries.

Ambassador Biao voiced his gratitude and thanks to President al-Assad for that honor, thanking also the Syrian people and Foreign Ministry for their constant cooperation to perform his mission as an Ambassador.

Ambassador Biao said that he was a witness on the Syrian people and army’s confrontation of terrorism in the war been waged against Syria.

He also reviewed the development stages of Syrian-Chinese relations over the past years, foremost is Syria’s accession to the Belt and Road Initiative and the holding of meetings of the Chinese -Syrian Joint Higher Committee after a 12-year hiatus, expressing his pride in the friendship and cordial  relations that unite the two countries, which are getting stronger day after day. 2022-07-27
m.eyon
Share
Previous President al-Assad awards the Chinese ambassador in Damascus the Syrian Order of Merit of the excellent degree
Next Agriculture Minister calls for addressing food security problems in the region