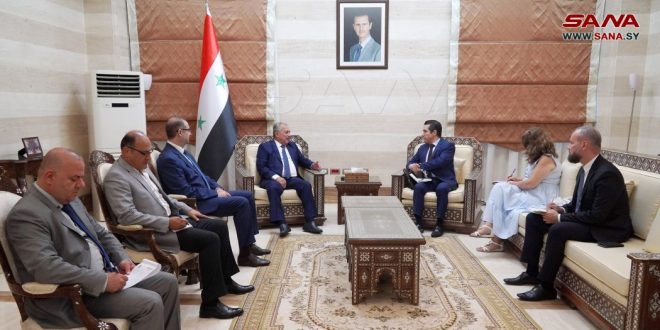 This came during a meeting on Sunday between the Prime Minister and Brazilian Ambassador to Syria, Fabio Vaz Pitaluga, on the occasion of ending his duties at Damascus.

Arnous pointed out importance of increasing the trade exchange between the two friendly countries.

“The doors are open for Brazilian economic actors and businessmen to invest in Syria and benefit from the advantages and facilities offered by the new Investment Law,” said the Premier.

He stressed the importance of encouraging the business sector of the two countries to increase and diversify their commercial activity.

He described the ties between Syria and Brazil as solid and historical, and they are based on mutual respect and appreciation.

For his part, Ambassador Pitaluga thanked the Syrian government for the facilities it provided to the Brazilian Embassy, and expressed the desire of his country and the Brazilian business sector to increase the volume of trade, establish investment projects in Syria and promote cultural cooperation.

The Ambassador reiterated his country support for Syria’s sovereignty, independence and territorial integrity, and expressed his admiration for the steadfastness of the Syrian people and their determination to confront and overcome the blockade.

He said that Brazilian Embassy in Damascus has not closed its doors during the years of wars in Syria.