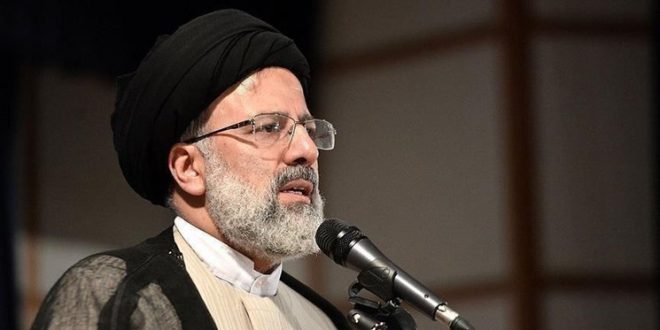 Tehran,SANA-Iranian President Seyed Ebrahim Rayeesi underlined the importance of expansion of ties among the BRICS members, saying that unilateralism and sanctions imposed by the world powers against the independent states show the necessity for the formation of international bodies alongside the UN.

Contradictory global approaches, unilateralism, nationalism and challenges such as sanctions and coercive economic measures underscore the importance of “creating and strengthening new institutions alongside the United Nations” in an attempt to take an important step towards the realization of a “human society with a common future” while respecting the national sovereignty of countries, Rayeesi said, addressing the BRICS Business Forum virtual summit, which was attended by the group’s top leaders on Friday.

“We are ready to share all our capabilities and potentials, including short and cheap transportation and transit networks, the exceptional asset of trained manpower as well as significant scientific achievements to help BRICS realize its goals,” he added.

“We need to strengthen the global platform for the effective role of independent multilateral institutions in achieving integrated development and global peace.”

Rayeesi said BRICS, as a pioneering group comprised of large emerging economies, has been able to launch new global trends by promoting its initiatives.

“With complementary economies and cultural diversity, BRICS members can meet one another’s needs and share their national and indigenous development experiences to promote global prosperity.”

BRICS is the acronym coined to associate five major emerging economies: Brazil, Russia, India, China (PRC), and South Africa. The BRICS members are known for their significant influence on regional affairs. Since 2009, the governments of the BRICS states have met annually at formal summits.

BRICS member states conform 40% of the global population and nearly a quarter of the world’s gross domestic product.

2022-06-26
bushra
Share
Previous Kyiv regime forces plan to blow up dam in DPR, blame it on Russia
Next Russian forces liberate 800 civilians from the Azot plant in Severodonetsk

Damascus,SANA-Artists Syndicate of Damascus mourned on Wednesday the death of the actress Antoinette Najib who …