The Israeli recurrent aggressions on Syria to be discussed in the UN meetings, Lavrov 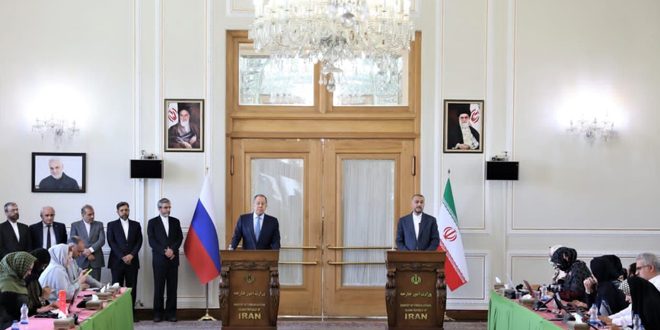 Lavrov said during a press conference with his Iranian counterpart Hossein Amir Abdollahian in Tehran on Thursday, “The Israeli shelling of Damascus International Airport is a serious incident that deterred the delivery of humanitarian air cargo”. “We will discuss it with Security Council’s members and we will continue to work at the United Nations to prevent the recurrence of these unacceptable incidents.” Lavrov reiterated Russia’s stance on “resolving the crisis in Syria in accordance with UN Resolution 2254, which stressed the need to respect Syria’s sovereignty, unity and territorial integrity”.

Lavrov pointed out that “Moscow and Tehran have the same point of view concerning the international community’s participation in reconstruction projects in Syria and facilitating the return of displaced persons and refugees”. “Western countries continue to obstruct this return and pressure UN agencies and politicize their work in this framework.