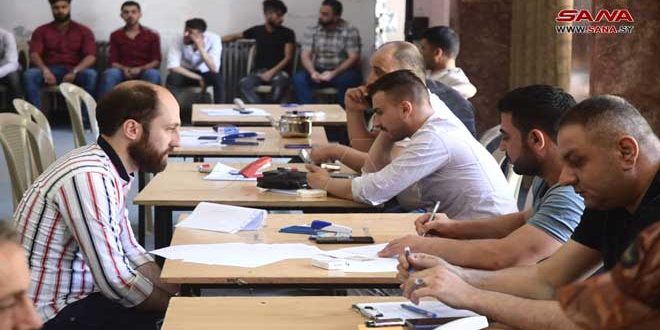 Provinces, SANA- The comprehensive settlement process began on Saturday in Jayrud city, Damascus countryside, while dozens continued to flock to the settlement centers at al-Amel Hall in Deir Ezzor city and al-Assad Sports Hall in Aleppo, in cooperation between the competent authorities and dignitaries of these areas.

The authorities concerned opened today a settlement center in Jayrud city, in cooperation with clan dignitaries who thanked the authorities for this process since it provided the opportunity for all who want to settle their status, according to SANA reporter in Damascus countryside.

The settlement process continued at al-Amel Hall in Deir Ezzor city and at al-Assad Sports Hall in Aleppo city, as scores have flocked to join the process initiated by the State.