Ambassador Ala, WHO Director-General discuss cooperation with Syria to enhance healthcare 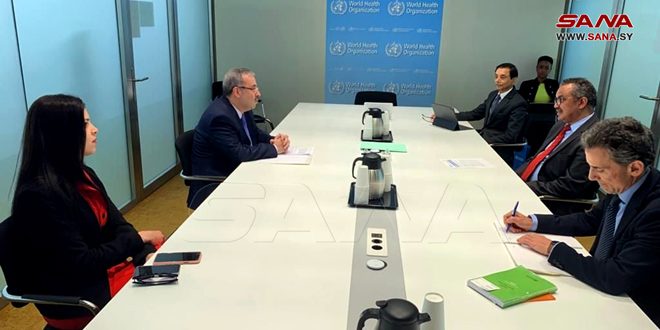 Geneva, SANA- Syria’s Permanent Representative to the UN and international organizations in Geneva, Ambassador Hussam Eddin Ala has discussed with Director-General of the World Health Organization, Tedros Ghebreyesus, the standing cooperation between Syria and the organization to support its efforts in providing healthcare and ways to develop it, in addition to other issues on the agenda of the 75th World Health Assembly scheduled to be held in Geneva this month.

Ambassador Ala referred to the challenges facing Syria as a result of the terrorist war and the unilateral coercive measures which have negatively reflected on various vital economic and service sectors, including the health sector.

In this context, he hailed the support provided by the World Health Organization to Syria, including its efforts to confront the Covid-19 pandemic, underlining the importance of enhancing international cooperation to support the resilience and rehabilitation of the health sector and the early recovery programs in Syria.

The Ambassador also reviewed the health conditions in the occupied Syrian Golan and the suffering of its people from discriminatory policies and practices that impede their enjoyment of their basic rights, including the right to health.

He stressed that the Israeli occupation authorities must abide by the obligations imposed by international law on them as an occupying power, affirming that the World Health Organization should assume its responsibilities in monitoring Israeli violations in implementation of relevant World Health Assembly resolutions.

For his part, the WHO Director-General hailed the efforts made by Syria to protect its citizens in the face of the Covid-19 pandemic, asserting the organization’s commitment to continue providing the support required by Syria to strengthen the health sector and provide health care to its citizens.

He added that the organization is keen on following up the health conditions in the occupied Arab territories within the framework of its mandate and relevant resolutions.