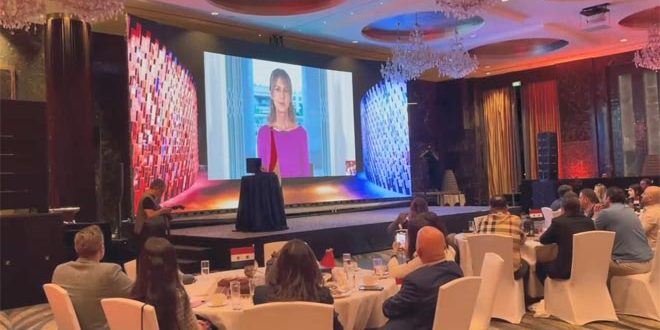 Damascus, SANA- Mrs. Asma al-Assad has met the Syrian pavilion team at Expo 2020 Dubai via videoconference technology and thanked them for the efforts they made to achieve the   success of Syria’s participation in this global forum.

Mrs. Asma stressed that the Syrian pavilion, with all its contents, was able to convey the image of Syria with its people, identity and culture to the whole world and to highlight its status and role throughout the ages.

Mrs. Asma described this distinguished participation, to which more than 150 Syrians residing in Syria and abroad contributed, as a national achievement of which all Syrians are proud.

Mrs. Asma said that all the Syrians who followed up the success of the Syrian pavilion and its various activities in the exhibition are proud of this great national achievement, of which the members of the Syrian team were an essential part and an important element of its success.

Mrs. Asma affirmed that national achievements are not evaluated by results only, but by the capabilities available to the participating country and the conditions in which it lives, indicating that Syria, which suffers from terrorism and has not yet recovered from the repercussions of war, was strong and open to other peoples in the exhibition and shared its vision for the future.

Mrs. Asma added that Syria achieved a remarkable participation and communication at Expo 2020 Dubai, because it was the first to begin communication in history through the first alphabet, and it also exchanged cultures because it is the land of civilization and knowledge and the cradle of many human inventions that contributed to the development of humanity.

Mrs. Asma noted that Syria, which participated at the Expo with all its dignity, ambition and ability to adapt, attended with the spirit of its pavilion team, which all visitors touched and with their passion to complete the challenge.

Mrs. Asma indicated that the Syrian pavilion team proved that patriotism is by deeds and not words, and it is a teamwork, enthusiasm and eagerness to contribute to anything that serves Syria. It also proved that the basis of success is the mind, work and will, no matter how limited the possibilities.