On the International Quds Day, a march with wide popular participation set off in Damascus 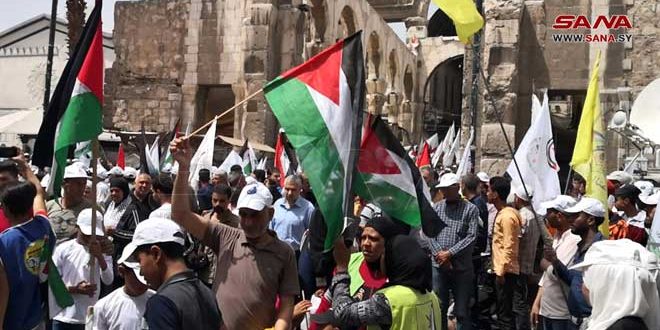 Damascus, SANA- With wide popular participation, a march set off on Friday from the entrance of Hamidiya market towards the Umayyad Mosque in Damascus in support of the Palestinian people and their resilience in the face of Zionist attacks.

During the march organized by the Permanent Committee to commemorate the International Quds Day, the participants raised a model of Al-Aqsa Mosque and the national flags of the axis countries and the resistance factions and chanted slogans emphasizing the restoration of the legitimate rights of the Palestinian people and the inevitability of victory over the Zionist enemy and the liberation of the occupied Arab lands.

This was followed by a central festival in the presence of Syrian official figures, leaders of Palestinian parties, factions and forces, clergymen and a number of representatives of diplomatic missions accredited in Damascus.

Secretary-General of the Palestinian Popular Struggle Front Khaled Abdel Majid stressed in his speech that Jerusalem will remain the axis and compass of the national and liberation struggle, and it is closer than ever before, pointing to the integration in the work and role of the resistance axis, which gave hope again to the Palestinian people and strugglers of the Palestinian resistance factions to continue  the  approach of resistance to confront the Zionist entity.

The International Quds Day is commemorated on the last Friday of the blessed month of Ramadan all over the world in solidarity with the Palestinian people and in rejection of the attempts to Judaize the Holy City practiced by the Israeli occupation authorities.

2022-04-29
bushra
Share
Previous Russian Special Military Operation to Protect Donbass- Latest Updates
Next Syria affirms universality of Chemical Weapons Convention will not be achieved without forcing Israel to join the convention , place its weapons under control